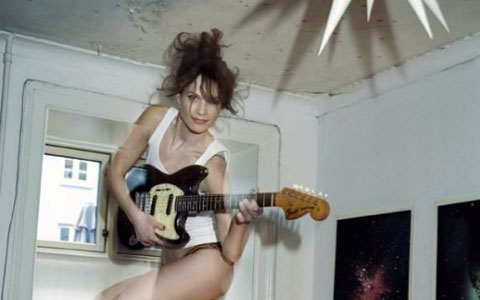 Oh, Oh Land! Following in the footsteps of the marvellous Treefight For Sunlight, Denmark throws up another unmitigated success in the form of Nanna Oland Fabricius, aka Oh Land. The pop songs on this record are as catchy as scrofula, while being casually and brilliantly experimental to boot. Nanna Fabricius is a complete star: daughter of an opera singer, and a ballerina until injury intervened, it would appear that artistic ability is written into her DNA, and Oh Land simply proves this suspicion. Move over Nanna Birk Larsen (from The Killing) there’s a new Nanna here to capture your attention.

You might, about 15 years ago, have classed some of this album as trip hop but the sheer amount of pop melody Fabricius packs into her songs elevates it to the realms occupied by fellow Nordic popstrels Robyn and Lykke Li. The album kicks off with ‘Perfection’ and a sweet swathe of orchestration, before some gently muscular beats, which recall Boards of Canada, drop in. It’s a song about stalking, with Fabricius following her beau’s current girlfriend so that she can work out what makes him tick, and thus replace her. Like The Police’s ‘Every Breath You Take’, an innocent chorus takes on new meaning once we know what’s going on: ‘I will follow you / you will be my main direction / Everything you do is a gem in my collection / I will follow you until I will get your perfection.” While that goes on, the music simply soars to brilliant levels of euphoria.

‘Break the Chain’ is a sad tale of how Fabricius’ ballet career came to an end, but she reveals a fighting spirit at the same time: “He says sorry but you’re never gonna dance again / but my feet just keeps me movin’ tryin’ to break the chain”. We really get to hear Oh Land’s fabulous vocal range here, going from gentle tones to a soaring Stina Nordenstam-style falsetto (or Bjork, even), and again the chorus flies off to glorious territories.

‘Sun of a Gun’ takes us to more experimental planes, with thudding beats jarring against the cooing vocals before developing into a stone-cold pop classic. I hate to sound like a broken record, but this girl knows how to produce a killer chorus; it’s not just that pop brain which impresses though, it’s the whole way she constructs a song, the contrast between dark and light, the ability to tell a story, and lift the music away from the dreary conventionality of a song about relationships – ‘Sun of a Gun’ does all that in three minutes.

Even the ridiculous moments that shouldn’t work have a winning quality. ‘Voodoo’, a song about the science of the brain that rhymes ‘voodoo’ with ‘you do’, still manages to work its charms on the listener, and ‘Lean’ which is almost stupidly melodramatic, thrills and connects with its total sincerity. ‘Wolf and I’ gets us back on track with a sultry R&B groove jam-packed with clicks and beats, and the electro rush of ‘Human’ is too brilliant for words.

I’ve still got to mention the glockenspiel-led glory of ’White Nights’, the neighbour-baiting ode to partying ‘We Turn It Up’ and lovely album closer ‘Rainbow’. Fabricius leaves us with a song all about the perfect moment: “You can make it click / making me pop / going for the gold with the clean cut”. It’s the perfect end, the gentle balladeering floating off and fading out with ghostly harmonies.

There’s simply not a bad word to say about this record. Oh Land is, simply put, as close as you’re likely to get to the perfect pop record and surely one of the standout releases of 2011.

Oh Land is available now in the USA, it gets its UK release via Sony on July 11.