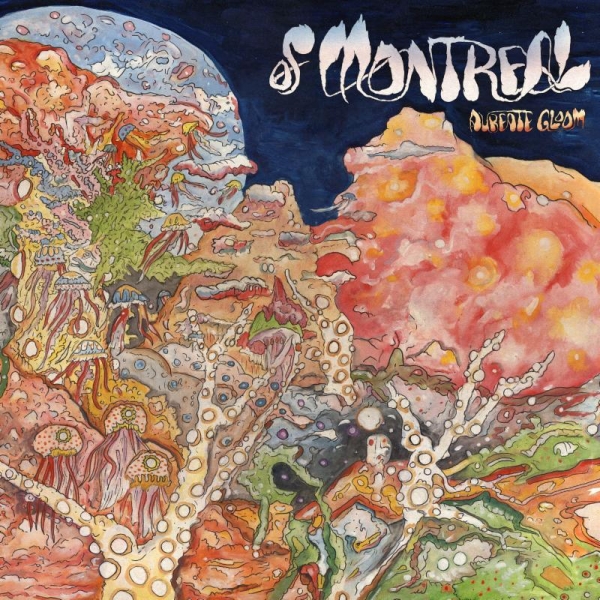 We need to talk about Kevin.

Ever since 2007’s Hissing Fauna, Are You the Destroyer?, Kevin Barnes has made a habit of making his personal life the focus of his music with Of Montreal. Barnes bottomed out in 2012 with Paralytic Stalks, another LP directly inspired by a breakdown in his marriage; deftly balancing his wild gift for melody with nods to the avant-garde likes of Penderecki and Stravinski, it’s been given a short shrift by fans, and Barnes himself. Secretly, it’s of Montreal’s best album.

Then he junked his band – an odd gesture, given that he’d been recording solo for close to a decade – headed for the California canyons with a new ragtag bunch of players, and made Lousy With Sylvianbriar, a pseudo-country LP, recorded live to tape. More straightforward than anything he’d done in years, it seemed like the most extreme decision in a career dictated by such choices, but the resulting album showed that Barnes could play it straight and still be the freakiest guy at the party.

Two years on, Barnes’ marriage has hit the rocks again. It would be churlish to bring this up, were it not for the fact that so much of his work has hinged on the ups and downs of his relationship with his wife. Barnes doesn’t shy away from talking about her influence on his writing – she’s been mentioned by name in some lyrics and directly inspired countless others – nor does he flinch at making himself seem like the arsehole in the situation. “I made the one I love start crying tonight,” he once screamed on "Spiteful Intervention", “AND IT FELT GOOD!”

So, with the same troupe who worked up Sylvianbriar, Aureate Gloom marks the most relentless exercise in musical trepanning in a discography that could already fill a psychiatrist’s notebook many times over. The laid-back Dead-jams are as gone as Jerry; instead, Aureate peddles taut, nervy post-punk riffs, inspired by a six month period Barnes spent living in NYC, recounted in the "Marquee Moon"-aping "Last Rites at the Jane Hotel":

And that line pretty much sums up the main failing of Aureate Gloom. To write about suffering is quite one thing – Kevin Barnes has done it better than most straight-up confessional writers nowadays – but to self-consciously put yourself in situations to write about to enhance that suffering rings utterly false.

Maybe it’s the lyrics’ detachment that makes Gloom such a punishing listen; the direct channelling of anger that made Hissing Fauna and Paralytic Stalks so compelling has given way to resignation – an emotional transition which Barnes doesn’t seem quite sure what to do with. So when, on "Virgilian Lots", he writes off his emotional past – “All my memories once almost sacred are embarrassments to me now” – it’s with a bluntness that’s almost unheard in most ‘pop’ music. As the listener’s skin crawls, you can see why that’s the case.

All of this would be fine, though, if the melodies were intact to cushion the blow, but Barnes’s partial headtrip to CBGB has left the album wanting for its writer’s most complex, innovative gift. Instead, Barnes lets the inherent rhythms of his lyrics carry the message, which makes the album all the more difficult to truly get a handle on, let alone love.

[Sidenote: this album probably came to me at the wrong time. Hissing Fauna hit me as I was preparing for a break-up. Paralytic Stalks was released when a relationship was on the rocks. That relationship righted itself just in time for the relative normalcy of Sylvianbriar to make sense to me. That’s not to say I’m a masochist who demands that a musician’s pain tallies with my own…but I’ve gotta admit – sometimes, it helps.]

Some positives then: two albums in, the new configuration of the band sounds impossibly tight. Wrapping themselves around Barnes’s illogical chord progressions and song structures is no mean feat, and Of Montreal Mk. 3 do it with aplomb. The funk throwback of opener "Bassem Sabry" sounds so together it could well have been Barnes playing all the instruments, whilst "Apollyon of Blue Room"’s charging two-chord see-saw immaculately channels The Kinks by way of "My Sharona".

Best of all is "Estocadas", written early enough in the sessions to still have a casual glance backwards to the Sylvianbriar sound. In any other song on the album, the lyrics’ withering putdowns (“Some fucker took what’s mine, now he’s acting like she’s his…”) would have driven the album further into despair. Instead, its slacker-cowboy sound (complete with a gorgeous string part arranged by returning collaborator Kishi Bashi), and Dylanesque non-sequiturs make it the LP’s most appealing prospect, and truest outlier.

The closest that Aureate Gloom (probably) gets to the way it was meant to sound in Kevin Barnes’s head is on its closing track. The multi-part "Like Ashoka’s Inferno of Memory" works almost like the five stages of grief in miniature – it can’t be coincidence that the album’s final line is “I guess I deserve it, I guess that it is karmically correct” – rounding the album out with a final sixty-second burst of kicks, joy and darkness. Tellingly, the song was the last thing to be written for the album. If Barnes could have held on to his creative urges for just a while longer, it could have been the springboard to something great. And maybe it is – the band is, of course, already halfway through a new LP.

“Sometimes,” Barnes sings near the album’s end, “you get the punishment that someone else deserves.” He's not wrong. Aureate Gloom makes for a confused, scary, frustrating wallow into the psyche of a man I’m starting to fear getting to know any better.