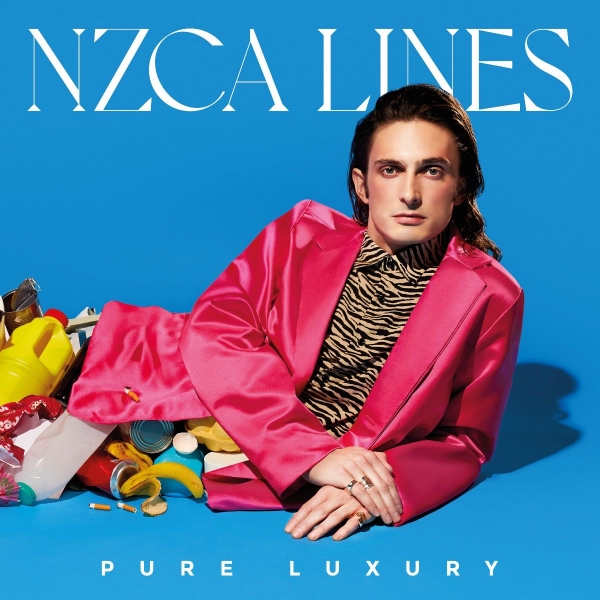 ​​Excess is order of the day on Pure Luxury. NZCA LINES, brainchild of Michael Lovett, continues to engineer undiluted electro-pop - masking the woes of a fractured world under the garb of summer-ready sheen.

Since emerging at the height of chillwave back in 2012, Lovett has propped up renown for clear-cut, minimalist synth-saturated output, an ever-dependable format that has adorned the band’s sparse string of album releases. Sophomore effort Infinite Summer would later see the Londoner augment what had existed up until that point as a solo project; enlisting Ash’s Charlotte Hatherley and Sarah Jones, of Hot Chip and New Young Pony Club, to the ranks. With Hatherley having departed prior to this third album, the remaining duo appear Teflon-coated in their resolve and aptitude to conjure funk-filled finery.

Floating further towards the realm of R&B than its predecessor, Pure Luxury draws much of its firepower from a simmering blend of buoyant basslines and mercury-soaring guitar riffs – poolside party-designed anthems that burst with tight, iridescent pulse and rhythm. Much of what previously shaped NZCA LINES’ rather neat, icy electronic identity is traded for a sweltering palette, twinned with themes confronting the relationship between consumerist impulse and environmental concern. The latter dichotomy is ironically elevated to the fore through the flawless, unblemished aesthetic Lovett manages to summon.

This extends more fully into disco-leaning territory on occasion. The simmering “Prisoner of Love” owing its luster to a smooth stylistic crossover between Cameo and Prince. Lovett almost vocally inhabit the Purple One’s guise on many of the tracks, a resemblance that was squarely at the forefront of Infinite Summer; a bold, ostentatious persona bearing down on the album’s glossy framework. A formula that reaches its peak on “Opening Night”, channelling, to a certain extent, '80s electro-funk exponents Zapp, while the shimmering Daft Punk-inflected “For Your Love” doubles down on unabashed dancefloor revelry.

Pure Luxury’s strengths issue from the way it commits wholeheartedly to a brash sonic blueprint, the unremittingly sleek surface polish sharpening its underlying social commentary - Lovett’s songwriting at its most multi-layered.