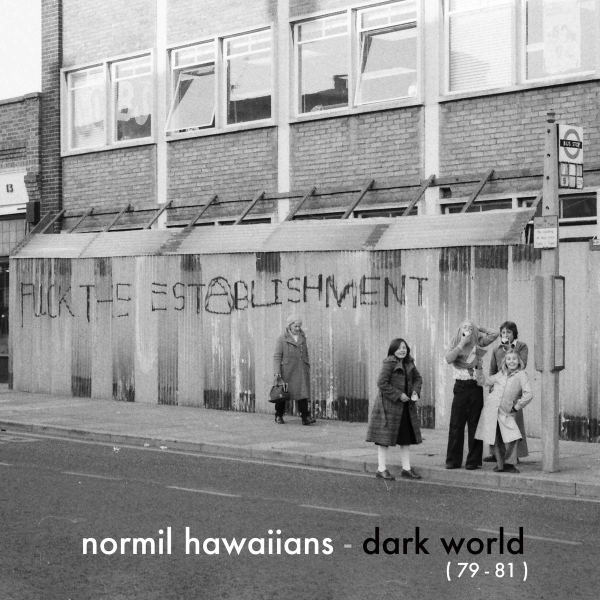 Post punk, very much like disco is a genre which keeps on giving decades after becoming a particular sound of a particular time. There’s an endless list of bands which didn’t hit the mark at the time of release, but as time catches up with their ideas, bands which failed to engage become lost gems from another time, timestamped to the past, however stylistically managing to sound pretty contemporary.

Normil Hawaiians, a South East London collective originally active from the late seventies to mid-eighties, and long lost until the Upset The Rhythm imprint licensed their back catalogue. Although critically acclaimed and supported by John Peel, this didn’t translate into sales, and by 1985 the band disintegrated until reforming several years ago.

This album, a collection of their early material is a fascinating snapshot of where post punk was at the time, post- Joy Division, and right at the time where bands such as Teardrop Explodes, Buzzcocks and Echo & The Bunnymen were infiltrating the charts.

Driven by improvisation, rather than structure, this collection is a fascinating glimpse at a time where anything could happen. Although they operated within the frame of post-punk, they utilized various sounds and techniques which all this time later sound fresh, deploying the same studio trickery as Adrian Sherwood and Martin Hannett, theirs is a sound which is full bodied, but manages to sound hollow, dub techniques meaning bass is prominent and the perfect foil to the icy skeletal guitar riffs.

Tracks such as "The Beat Goes On" and "Dark World" are dark mood pieces aligned to Public Image Ltd’s immediate classic Metal Box album, the out of tune vocal charm of Janet Armstrong who went on to work with Bowie on "Coincidence" is brilliant piece of pre-C86 chaos which could quite easily be mistaken for an early release by Scottish duo The Vaselines, while the world music, punk funk bass-led vibes of "Obedience" and "Party Party" really should’ve had them giving the likes of Gang Of Four, ESG and A Certain Ratio a run for their money.