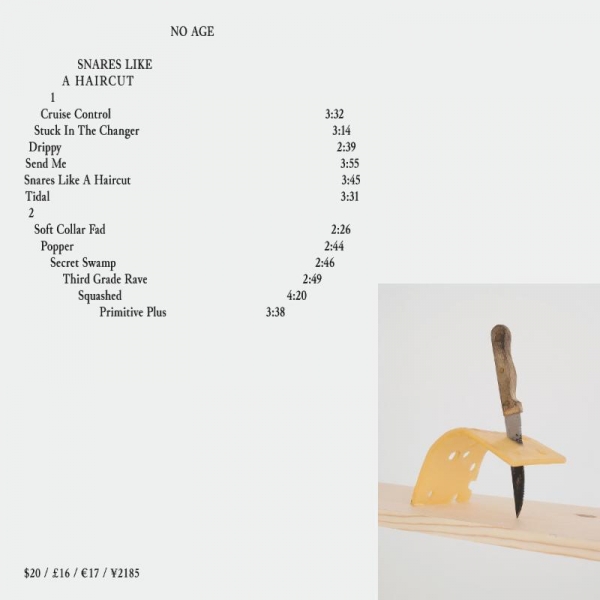 No Age have in the past come with a few high-minded strings attached, whether they be of the duo’s own tying or stitched onto them by others. “Cruise Control”, the opening track on Snares Like a Haircut, their fourth studio album and first since 2013, suggests they’re trying out new concept, allowing for the closest to uncomplicated enjoyment they have come in some time.

“Drippy”, a dream-punk stormer at a characteristic two-and-a-half minutes in length, might be the closest thing to an explanation for their most recent extended break that No Age offer here, with drummer/vocalist Dean Spunt singing about “two cups” that “can’t be filled until they take a needed rest.” Fair enough coming from a pair of musicians who previously went on a creative run through the last four years of the 2000s, from Weirdo Rippers to Everything in Between, that found them fêted in the worlds of both music and art, across the blogosphere and high brow magazines alike. Spunt and guitarist Randy Randall have since settled into a new pattern of punctuated hiatuses, but when No Age surface the potential for another sustained barrage seems to bubble up with them.

Their “Separation” 7” in 2016 was a signal that the sonic stripping down of An Object a few years prior might have run its course, and the full-on resumption of Spunt’s careening drums and Randall’s disheveled stacks of static and swirls of pedalboard bliss on Snares Like a Haircut confirms it. No Age’s noise was never exactly tormented, but there are times on this record when they sound almost carefree, or at least in reach of it. “I said send me/Where should I go?” Spunt repeats on “Send Me”, musing on a life of acting first and thinking second. The familiar No Age is present and accounted for between the messy-tight bursts and the moments of fidgety peace, but their anxiety/serenity scale may be one weight closer to balance.

“Soft Collar Fad,” driven by a “Been a Son”-like guitar riff, and the first single released from the album last October, gets the jump on critical assessment: “Maybe this is progress/Maybe it’s not/But it’s not for you to say.” Be it a preemptive rebuke or not, Snares Like a Haircut is assured on its own terms, showing No Age comfortable with music for its own sake.