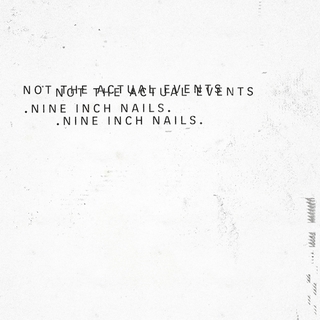 As a songwriter and composer, Nine Inch Nails’ Trent Reznor is wildly prolific. 2016 saw him working on three film scores; a nine minute track for NASA’s short film on the Juno mission to Mars, as well as soundtracks for upcoming movies Patriot’s Day and Leonardo DiCaprio’s climate change documentary Between the Flood.

But when it comes to his role as NIN leader and the elder statesman of caustic angst and skin-peeling industrial rock, Reznor prefers to take a drip-feed approach. As such, a NIN release still drops with a sense of occasion. EP Not The Actual Events is the band’s first new material since 2013’s pulsing Hesitation Marks and is described by Reznor as an “unfriendly, fairly impenetrable record that we needed to make.”

For the first time, long-term collaborator Atticus Ross has been named as a full-time NIN member, suggesting Trent could finally be loosening his iron grip on the creative controls, yet musically, as usual it’s his intensity and ferocity that drives the EP’s best bits.

The cool, anthemic streamlines of Hesitation Marks only surface on “Hello World,”, a motorik earworm which takes its cues from the bubbling acid electro of “Copy Of A” and “Came Back Haunted”.

Elsewhere, these tracks revel in blasts of bleak imagery, acrid rage and grim catharsis that lean closer to the band's harsher, fist-fucking work, Broken or The Fragile. Singing hollowly on opener “Branches/Bones” Reznor moans, “Still can make out pieces with the opening sewed shut.”

Later, Dave Grohl pops up on drumming duties while Trent flexes his monstrous biceps and packs some serious muscle behind the industrial riffery of “The Idea of You”, and Mariqueen Maandig - How To Destroy Angels chanteuse and Trent’s wife - provides dead-eyed vocals on “She’s Gone Away”, a six-minute trudge through grinding metal gears and horror-inducing effects.

In five tracks and just over 20 minutes, Not The Actual Events manages to build on Nine Inch Nails' past while stepping resolutely into their future. And after 28 years, we’re still excited to see what comes next.