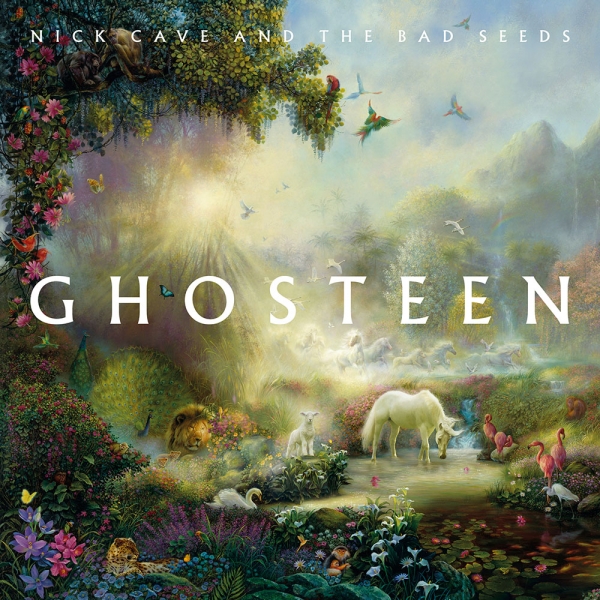 Nothing could have prepared us for Skeleton Tree.

This decade’s premier album of loss, it not only found Nick Cave and The Bad Seeds dabbling with some of the most adventurous songcraft of their career – perhaps forced into uncharted waters by the darkness of the (ultimate, if not initial) subject matter – but seemed to energise Cave for the ensuing live shows, by all accounts some of his most scintillating performances ever. Now, he returns with Ghosteen, and it’s difficult to conceive of a more perfect companion piece.

The desolation of Skeleton Tree remains, but it’s less absolute, its pitch-black tone less impregnable; moments of hope cut through the murk like shafts of light, carried on a major interval here, a gracious string motif there. Yet it’s impossible to understand this album other than through the lens of its predecessor, and the tragedy that fuelled it: the death of Cave’s 15-year-old son, Arthur. Ghosteen is, appropriately enough, a haunted record, whose spectres are fairly clear throughout, if rarely explicated in Cave’s words.

Lyrically, Cave continues his move away from the novelistic character development and narrative storytelling that has characterised much of his writing across the decades, instead opting for a far more internal, abstract approach. Brief, pregnant vignettes are grounded by sudden moments of earnest simplicity – “I love my baby and my baby loves me”; “this world is beautiful” – that provide this sprawling, impressionistic record with a sense of focus and direction. Vast swathes of little more than synth drones and suggestive piano are given enormous depth by Cave’s lyrical and vocal precision (listen out for the rarely-heard phenomenon of the Nick Cave falsetto, peppered throughout this album); he is, after all, unrivalled in his mastery of phrasing and meter, each and every syllable expertly placed and made to work to its fullest potential.

The twelve-minute title track serves as the perfect example here, a not-so-microcosm of the record as a whole. Much of it is given over to muted, reflective passages of delicate synths, the timbre more BBC Radiophonic than the more familiar Cavean Old Testament thunder, then as the halfway mark approaches, the track opens up into one of the most breath-taking chorus sections this writer has heard all year, an evangelical thrust skyward with Cave’s simple refrain at its centre. This is how Ghosteen operates, as a rich, shifting tapestry of grief, beauty, tailspinning disorientation, and illuminating snatches of lucidity.

If Skeleton Tree was Cave’s definitive expression of loss and despair, Ghosteen is a work that captures the beginning of his recovery. There’s little in the way of actual optimism here – how could there be? – but there’s a sense of gradual acceptance, of healing, and most powerfully, of a deep, primal love. Cave has written affectingly about love before, but it’s never felt so profound as this; rather than revelling in love, he is audibly clinging to it for dear life. It’s not only the source of the occasional notes of hope on this record, but the fabric of the pain that permeates its every movement.

It’s an intimate privilege to share an album like Ghosteen with Nick Cave. After a forty-year career of nigh-uninterrupted brilliance, he’s somehow in the form of his life in 2019, aged 62. Of whom else can we honestly say that?