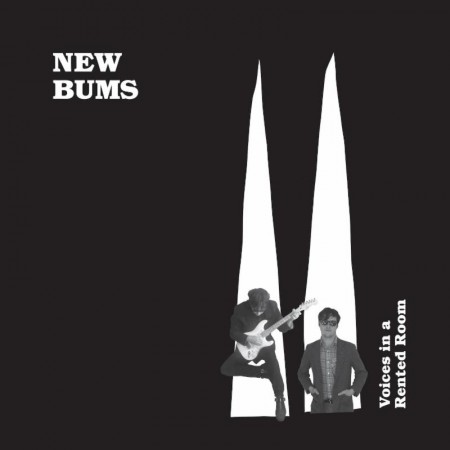 New Bums is the collaborative project of guitar wielding duo Ben Chasny (Six Organs of Admittance) and Donovan Quinn (of the lesser known but equally good psych-folkers Sykgreen Leopards). For those familiar with their previous work New Bums may come as a surprise, as the meeting of these normally kaleidoscopic minds has stripped away most of the psychedelic tendencies to leave what sounds suspiciously like a straight-up folk album.

Voices in a Rented Room doesn’t seem high on anything, other than maybe several beers. There are no disorientating non-sequiturs or crooked melodies – in fact it’s all quite disarmingly easy-going. The duo have shaped a gentle but dynamic collection of folk songs indebted to the spirit of Americana, it has the feel of old country – all late night open air and dusty windswept landscapes.

Opener “Black Bough” is typical of the vibe; a lethargic but elegantly poised entwining of acoustic strums, chimes and Quinn’s relaxed vocals – despite the subtlety of the song it also has a great immediacy and that is a quality which elevates this album above what might be bland revivalism. With an almost entirely acoustic palette this is a record detached from modernity; its narrators take us down wide open American roads flanked by deserts, lit only by headlights and the occasional dull glow from the road side bar while they romance girls with names like Sylvia and Elsa. Inevitably it sounds like a record slipped back in time 60 years or so, and it works really well without ever coming off like some sort of cheap pastiche.

This isn’t really the fun time road trip record that might make it sound like though, it certainly has some convivial moments (“Your Girlfriend Might Be A Cop” is like the amusing climax of extreme stoner paranoia) but on the whole is fairly inward looking – a sweetly expressive and philosophical slant exudes from the songs. They often have a quiet spirituality about them, something which shines on “It’s The Way” and with the virtuoso picking on “The Killers and Me”. There are a few tracks which don’t quite work – “Pigeon Town” has a fairly irritating chorus, and “Mother’s Favourite Hated Son” meanders without any of the subtle vibrancy of the other tracks, but these are minor gripes and in the wider context of the album they fit in well enough with the tone of the record.

It remains to be seen if New Bums will be a continuous collaboration between Chasny and Quinn or simply a one-off flight of fancy, but on the strength of the songs here and the pitch perfect atmosphere they’ve conjured it would be criminal if we didn’t hear more from them in the future.