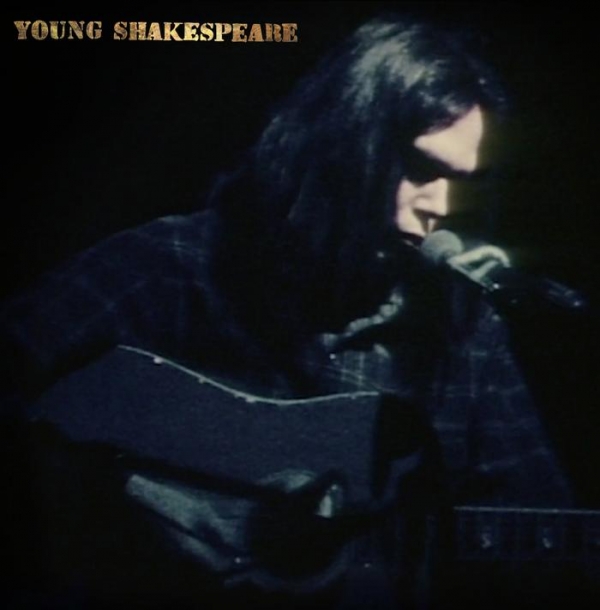 Released only a few weeks after the exhilaratingly loose, hard-stomping and joyous 1990 Crazy Horse club show captured on Way Down In The Rust Bucket, Young Shakespeare captures Young at the opposite end of his musical spectrum, in solo acoustic mode in 1971. Ostensibly on the road to promote breakthrough 1970 solo album After the Goldrush, Young was keener to focus on the songs - “Old Man”, “Heart of Gold” - that would turn the Canadian songwriter into a proper star when included on 1972’s Harvest.

Fresh from the huge success of Deja Vu (as part of Laurel Canyon hippie dream supergroup Crosby, Stills, Nash & Young), Young is captured here at the first peak of his powers as a performer. Alternating between earnestly heartfelt (it's hard not to think of the sadly premature passing of hugely talented original Crazy Horse guitarist/singer Danny Whitten during the sincere introduction to junkie eulogy "The Needle and the Damage Done") and wryly funny (making fun of his meagre piano chops before the spellbinding drama of "A Man Needs A Maid", engaging in some amusingly 'meta' critical analysis of earlier material during a singalong "Sugar Mountain"), Young is a captivating host between the tunes. Although he didn't have a huge catalogue to draw from 50 years ago, almost every song sounds - and is delivered - like an absolute classic, with spooky and stark acoustic renditions of early Crazy Horse jam classics "Cowgirl in the Sand" and "Down by the River" hitting particularly hard.

Gradually, a logic of sorts in relation to Young’s seemingly inexhaustible run of archive releases emerges. The seemingly scattershot era and genre-hopping brings to mind Young sampling through dozens of disparate tapes until he hits on something genuinely exciting that simply must be shared with the fans, ASAP. Thus we go with wild unpredictability from the flannel-clad proto-grunge feedback king captured shredding gorgeously tortuous squeals from his long-suffering Les Paul with his trusty garage rock compatriots Crazy Horse on Way Down In The Rust Bucket to the legend-in-training heard defining our collective idea of what a solitary, soulful and frequently troubled singer-songwriter looks and sounds like on Young Shakespeare.

Some of what emerges from this flood of archival activity is essential (unreleased 1974 album Homegrown, released June 2020), some of it is must-hear for even medium-level fans (Rust Bucket) and some is for die-hard fanatics only (Return to Greendale, a live rendition of 2003's tune-dodging rock opera that came out in November 2020). Young Shakespeare belongs firmly in the richly rewarding middle category.