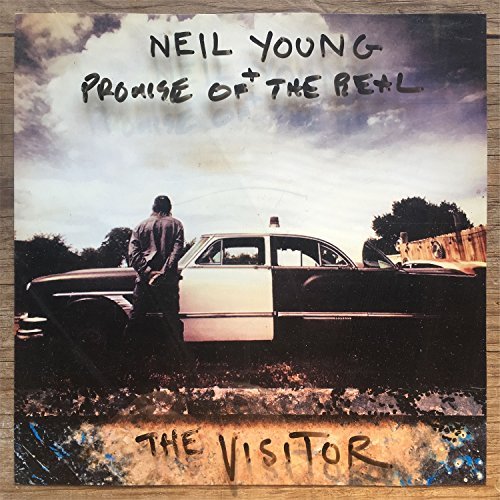 Ever since taking a detour towards murky masterpieces ala On the Beach (1974) and Tonight’s the Night (1975) after the laidback melancholy of 1972’s Harvest made him a superstar, Neil Young’s USP has been a wilful refusal to pander to audience expectation. The Neil Young brand states that he’s going to do what he wants, and it’d be wise not to expect any overt efforts to lure the crowds towards his latest piece of product.

This makes the high profile publicity campaign for The Visitor a bit of an anomaly. The album's release coincided with the launch of Young's massive, currently free online Archives and an equally well-publicised intimate solo gig in Omemee, Ontario (Young's hometown) which was streamed live online. You get the feeling that the Canadian legend wants The Visitor (his 39th studio album, if you're counting) to resonate far beyond the hardcore fans who've continued to faithfully pick up (and most likely rapidly file away) such lukewarm recent releases as Peace Trail and Earth, a high concept live album that reflected on Young’s admirable commitment to environmental campaigning by overdubbing animal noises on so-so renditions of cherished deep cuts.

The Visitor deserves the attention: although wildly uneven, the album carries a distinct whiff of Young actually trying his best and focusing fully in the studio. This comes as a relief after albums that involved half-formed sketches posing as finished songs (2015's charmless anti-GMC rant The Monsanto Years) or swapping inspiration for perspiration to produce faint echoes of past glories (2014's lethally over-egged orchestral ballad collection Storytone). Reenergised, spirited and winningly eccentric, the result is by some distance Young's most rewarding album since 2012's sprawling Crazy Horse reunion Psychedelic Pill, and the most musically ambitious one since 1994's Sleeps with Angels.

Much of Young's more recent material has faltered when he's chosen to be an activist first and a songwriter second. Young’s efforts to instruct us on how to feel about whatever injustice is on his mind, as opposed telling us how he feels and making such an exercise in singer-songwriterly navel-gazing feel like deceptively simple universal truths, has tended to lead to one-dimensional, disposable pamphleteering rather than substantial songwriting. Politics in general and the current state of California-based Young's adopted homeland in particular are high on The Visitor’s agenda. The distasteful ghost of Donald Trump hovers over much of the proceedings, a ''game show host / who has to brag and has to boast / of tearing down everything I hold dear'' ("Almost Always”) whose ''playpen is full of deniers / flushing our future down the tubes'' ("Stand Tall"), promising another Neil Young album so deeply immersed in current affairs it's doomed to become irrelevant as soon as the current news cycle's over and done with.

However, songs such as the seriously beautiful, rambling country-folk of "Almost Always" - which nods its head towards both "Unknown Legend" and "From Hank to Hendrix" (off 1992's Harvest Moon) and doesn’t pale too badly in comparison to such classics - and the extended, prettily lilting closer "Forever", which reaches towards the unhurriedly evolving expanse of, say, "Like an Inca" or "Natural Beauty" and almost succeeds, weave the personal and the political in a fresh manner. Soon as Young takes a turn towards undiluted sloganeering, things nosedive drastically. Surrounded on both sides by fun but inconsequential jams, "Children of Destiny" is probably Young's most leaden protest song yet, an over-produced slice of Disney showtune schmaltz with lyrics that are so vague in their general ethos of sticking-it-to-the-man that it could just as well be employed by the so-called Alt. Right the song's call for resistance must be aimed at, even if the tune is rescued from total humiliation by Young’s wonderfully vulnerable vocal. The message may not resonate but there’s no doubt Young’s engagement in politics and protest is very much for real.

The Visitor excels in the kind of attention to detail and musical imagination that's eluded Young in recent years. If the backing of California quartet Promise of the Real (featuring Willie Nelson's songs Lukas and, when playing live, Micah) has brought to mind a cut-price Crazy Horse on their previous two collaborations with Young, the band are superbly versatile here. Their contributions make even the dreaded 'topical' tunes - aided and abetted by Young's rediscovered willingness to work harder at his lyrics and melodies - sound compelling: featuring the unlikely sound of Young rapping, the tightly wound funk of "Fly By Night Deal" - featuring some of grizzliest guitar sounds Young’s ever managed to capture, which is saying something - is one of the album's instantly memorable highlights. Even though the song initially threatens to become capsized by its rushed lyrics (''you're the helping hand/you're the promised land'' surely calls for several pairs of rose-tinted glasses as a description of the United States' role in the world), Promise of the Real’s approximation of the gritty stomps that populated Young's mid-70's triumphs eventually elevates the joyfully sloppy "Already Great" into an infectious middle-finger salute to Trump's (in)famous campaign slogan.

When the songs are firing on all cylinders, the results can be extraordinary and quite unlike anything Young’s done before: quite an achievement from a 72-year old who has maintained an exhausting release schedule for 50-odd years. The spaghetti Western vibes of the whistling- and mandolin-powered "Change of Heart" elevate the half-whispered cut into one of Young’s most resonant offerings in the 21st century. Then there’s "Carnival", a staggeringly odd collision of a Tom Waits circus tall tale crashing headfirst into a languid Santana groove in service of a mysterious narrative that's full of vivid turns of phrase (a girl is described as having ‘’sugar in her eyes’’ whilst the protagonist regrets that ''too much time was spent / in the tent of the elephant of enlightenment'') that could either be stream of consciousness nonsense ala "Last Trip to Tulsa" or some sort of a coded critique of the grotesque goings-on at the current White House. Wilfully eccentric, self-indulgent and messy, but also rarely less than completely compelling: descriptions of the track could just as easily apply to The Visitor as whole but also Neil Young’s marathon career. Long may he run.