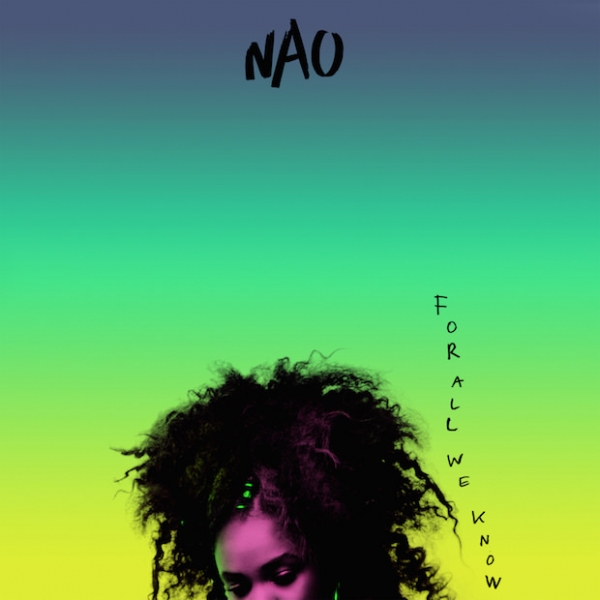 Nao’s “Bad Blood” was 2015’s greatest hit that wasn’t; an absolute tidal wave of a song that simply should have been everywhere. It still stands out within the context of her debut LP, For All We Know, but the album cements the East London singer as one of the freshest and most gifted artists in R&B today.

Armed with a cavalcade of top-notch electronic producers including Jungle, Royce Wood Junior, A.K. Paul, and Grades, For All We Know does an excellent job of showcasing who Nao is as an artist.

While her voice is certainly malleable (over the course of the album it gets distorted and altered several times), it is also has a singular innocence and vulnerability that could easily be mishandled if Nao wasn’t such a talented writer and collaborating with producers who clearly understand her strengths.

Nao doesn’t have the slick veneer of Kelela or the confrontational candor of Kehlani; her personality on For All We Know is vulnerable and accessible, an easy entry point for listeners who may not have heard her February 15 EP.

This also allows her to play different roles throughout the record that yield intriguing results. On the skittering, dramatic “In the Morning” she’s dealing with the fallout of a faltering relationship and struggling with the decision to call it quits.“He's falling even deeper, didn't see it coming / His heart belongs to me, but I'm still running / Away cause I can't tell him / I don't love him anymore”, she frets over tense production from John Calvert.

“Adore You” begins with the same rubbery bass drum as Jai Paul’s seminal “Jasmine”, but it warms into a charming and endearing tale of requited love with Abhi//Dijon chiming in to give the track an additional male perspective.

Fortunately, Nao doesn’t feel the need to rehash February 15 too heavily (a mistake artists often make when they’ve put out an EP prior to their full-length debut), and the only holdover, “Inhale Exhale”, remains one of her sharpest songs.

“Trophy” is a reunion for Nao and A.K. Paul, who worked together on her breakout, 2014’s “So Good”. It’s a departure from much of For All We Know, with Nao blasting a lover who thinks that she should be seen, not heard (“If you think that I’m a trophy you’d/Better change your mind”).

The production, all distorted guitars and handclap drums, is wonderful and weird in a way that differs from the rest of the synth-centric beats. There’s an incandescent chemistry between these two artists, and it’d be thrilling to hear them collaborate on an entire project. It’d also be thrilling to hear Nao work with Jai Paul himself, but we don’t want to get greedy.

“Give Me a Little” and “Girlfriend” are both fantastic as well, with the latter featuring gorgeous texturing of Nao’s falsetto and synths provided by GRADES and STiNT. Even though these records feature massive, expensive-sounding synth backdrops Nao imbues them with a humanity and sweetness that makes them feel genuine and insightful.

Nao’s gorgeous vocals can carry even a lesser track, like “Blue Wine”, and make it palatable. The track aims for slow and woozy, and while it can be more accurately described as lethargic, it does provide ample opportunity for the singer to shine.

For All We Know is among the most impressive debut albums we’ve heard in 2016, and heralds the arrival of Nao as a unique and fascinating figure on the R&B landscape. Not that we needed any additional convincing. For a less talented artist, working with this much firepower behind the boards might be overpowering, but Nao is simply too skilled a writer and singer to ever be drowned out.