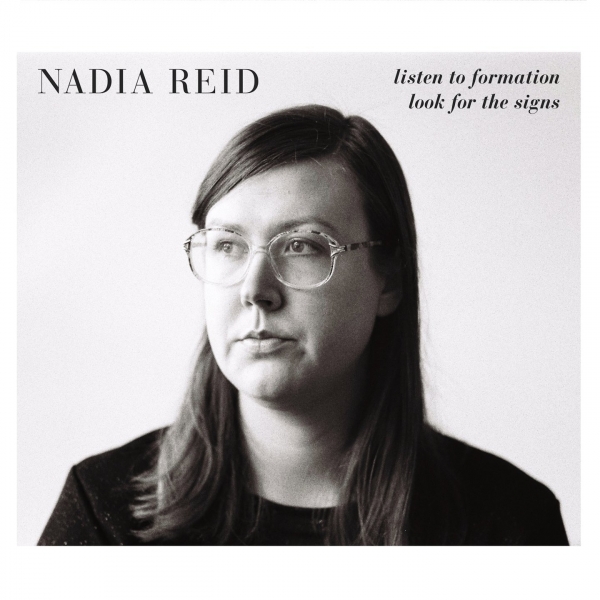 New Zealand singer-songwriter Nadia Reid conjures a surprising amount of acreage acros the nine tracks of Listen To Formations, Look For The Signs.

Following in the best of folk traditions, she tells self-contained stories that weave together to form a larger equally coherent pattern across the whole. It feels like a film which opens with airborne shots of beautiful panoramic landscapes with rolling mists and green mountains. The camera is languorous and unhurried in exploring this sparsely populated region. Then as they always do, in a series of zooming fades, the observing eye settles on a single figure sitting on some outcrop in the middle of nowhere. It turns out she's holding a guitar, and her name just might be Nadia Reid.

The isolation of spending all her life in the antipodes is exposed most poetically through her preoccupation with the ocean. From “I was sailing as I left my harbour” on “Some Are Lucky” to “where did my love go? / he was the sailor of my ship” on “Ruby” to a more final assertion on closing track “Call The Days” that “I was so sure that I’d go / that I’d already sunk the boat” the ocean, or the idea of isolation, thwarts her.  The idea expands across the water as on “Reaching Through” she sings “If only I knew how to write it I would surely understand / that love would grow thicker inside your foreign land” with even the opening track “Runway” hinting at flight as the only viable form of escape.

However, as with most of the themes she explores, this is not to say her inertia is an absolute feeling. Her songs of heartbreak are not vengeful, but character forming. Her placid, direct vocals are those of a teacher (if only a 23 year-old one) recalling tales of her own pain to pass on her experience. Perhaps, “Bittersweet I am / when it comes to young love” is the distillation of this style of explication. She is neither wholly bitter nor wholly sweet, accepting the pleasure with the pain as indeed she glories in her natural surroundings yet yearns for something elsewhere.

Her voice breaks with emotion on “Ruby”, a song written with the highest sense of autobiography. It begins with the focus on a chance meeting with a fellow traveller on an inter-state bus, but it bleeds into a projected exploration into her own self, using Ruby as her muse. It has a beautiful rhythm and the subtle shifting blur of her focus is intricately crafted.

If anything, Reid is straining to communicate too much: love, death, nature, loneliness, religion, timeless and specific storytelling, all fight for finite airtime. Her lyricism contains a certain level of abstraction; where each thought drifts without every logical step spelled out. This creates more space to fit so much in a short timeframe, but can feel scattered and overwhelming.