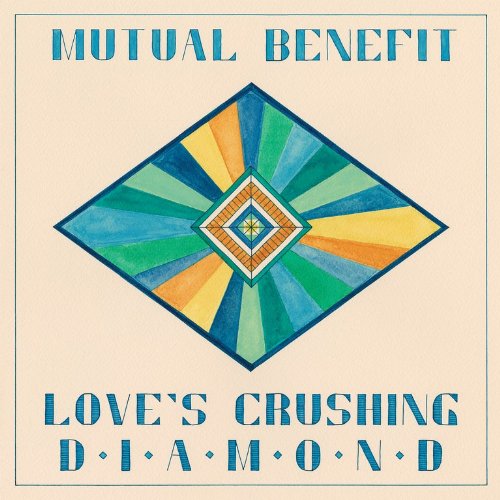 Mutual Benefit is legion. It is one man, it is all of his friends, and it is everyone he’s ever met. It is a solo project. It is a collaborative effort. It is a band. It is a collective. However, as much or as little ownership as he might like to take, Love’s Crushing Diamond could not exist without multi-instrumentalist Jordan Lee as its puppeteer, spinning whimsical love stories that choke the sightlines of the mind’s eye between reality and make-believe. Its pairing of light-handed folk balladry and philosophical theatrics emulates both the warmth of a gathering of close-knit friends recounting the sort of tales that grow ever more outlandish over time, as well as the solace of a quiet evening spent drifting in and out of consciousness on the couch.

Nomadism and baroque folk tend to go hand-in-hand, as does the inception of Love’s Crushing Diamond, written over the course of Lee’s travels—settling in Ohio, Austin, Boston and Brooklyn over the years, touring with friends all in between residencies. But beyond the mere scenery of travel, Love’s Crushing Diamond is given life by Lee’s audible affections for those he’s traveled with and met along the way, as well as his light instrumentation’s focus on intimacy and peaceful refrain over busy, conflicting melodies. This gives the brief, seven-song debut an intrinsic familiarity. Lee and co. translate their camaraderie across intimate, folk landscapes in a serene, inviting manner via string-rich melodies and the bare minimum of percussion in a style that is altogether welcoming and ever weary not to offend.

Lyrically, Love’s Crushing Diamond seems to co-opt the mundane with the metaphysical, whether Lee’s looking “for God in an empty motel room” (“That Light That’s Blinding”), or weighing one’s swimming abilities against metaphorically staying afloat with “a body divided” (“Strong Swimmer”). Even as he veers toward the romantic, singing “to look into her eyes/would make a fool of anyone” (“Advanced Falconry”), it’s tough to gauge whether Lee’s singing about the girl next door or Medusa herself—or perhaps more tellingly if, in his eyes, there’s any real difference between the two. Whereas three tracks later, on “C. L. Rosarian”— by and large a more traditional song of love and lament —Lee treats romanticism as devastating, yet so utterly optional, seemingly going so far as to outright fault his own romanticism: “careless love/and to stay is something that you wouldn’t do/so I’m letting go of what I’m holding to.”

Amply suited to any quiet evening, Mutual Benefit’s debut is one of sheer welcoming affection. Even Lee’s vocal performance, which calls to mind the inflections of Neil Young and a tone akin to that of Nick Thorburn (Islands/The Unicorns), has a delicacy that is at all times invitingly familiar. Like the tightrope act of love itself, Love’s Crushing Diamond perseveres through calculated effort never to offend or betray the trust of its betrothed listener.