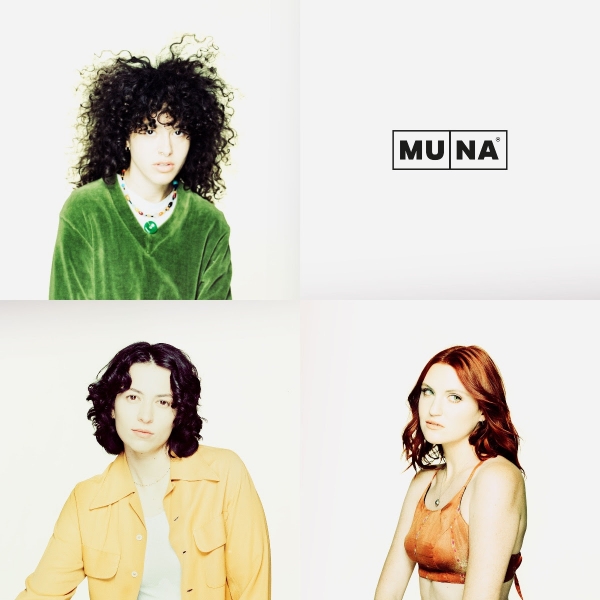 Now signed to Phoebe Bridgers’ Saddest Factory imprint, LA trio MUNA’s latest offering is a remarkable record laden with glossy synth-pop influence, oozing with enough conviction to fuel a rocket to the moon and back.

Opening with BEST FIT’s song of 2021 “Silk Chiffon,” MUNA is a departure from the band’s trademarks of heartbreak and queer tragedy, and instead acts as the light at the end of the tunnel, showing you that when you remain true to yourself and trust your instincts, fulfilment is found within.

The album's eponymous title is a perfect fit, with MUNA fully realised as a group: the adoration-filled “Solid” and boundary-setting “Anything But Me” demonstrate best how each and every song is so self-assured and filled with confidence. Even when Gavin wavers into hints of doubt looking back on a relationship on “Home By Now,” the overarching message of trusting your instincts remains steadfast.

The spacey “Runner’s High,” reflects on a break up but has a delicate optimism through wellness and self-care, and as it slowly builds itself up with self-assured phrases (“I didn’t fake those tears / But I haven’t felt like crying, since I put the car in gear”) it eventually reaches an almost euphoric feeling – much like a that of the song's title. This euphoria is found across MUNA, but closing track “Shooting Star” takes it to its fullest; a hopeful love song tinged with doubt that grows into an epic, fitting outro.

While powerful and impactful, MUNA also has its tender moments. Listen carefully and you’ll notice how every song has a near-silent introduction that quickly grows into the track, gently easing the listener in rather than hitting them over the head. The mid-point interlude – slow songs “Kind Of Girl” and “Handle Me” – is the perfect palette cleanser too; the trio know the exact balance of hard and soft that the album needs and execute it flawlessly.

Gavin’s vocal performance one-ups their previous albums, as she detours from her signature deep tones for moments that demonstrate a range and skill as both singer and performer. There’s also a noticeable difference between her delivery and other artists of the same ilk; when she sings “I wanna dance, in the middle of a gay bar,” on shimmering synth anthem “What I Want,” you desperately want to join her.

MUNA is all killer no filler. From its overall sound down to its finer details, Gavin, Maskin and McPherson have hit the mark completely. It’s amazing to see a band that are so unapologetically queer excel at their craft and create an album that is quite possibly, if not certainly, their masterpiece.