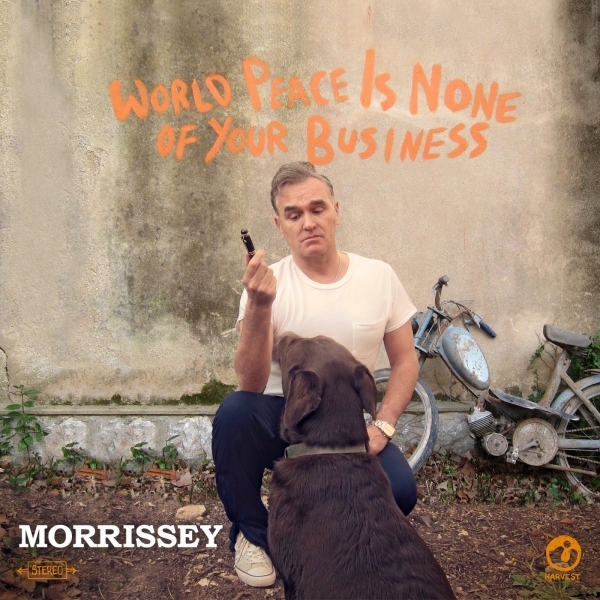 The prospect of a new album from Morrissey was once a cause for eager salivation among fans, dread among his detractors and, of course, another chance for the press to either demonise or deify him depending on what the coin flip of fashion demanded that week. In short, it was quite the kerfuffle.

Over the last decade though, his output has caused mild consternation and sometimes unfairly feint praise; the media preferring to focus on his (inevitably out of context) comments on animal torture and matters of race and culture while his fans squirmed awkwardly, hoping for more and better music, less in the way of cancelled tours and public controversy.

As Morrissey succumbed to ill health in recent years and his public persona was warped into some sort of pull-quote machine, click-bait for those who want to see what ol’ Moz has been condemning this week, the prospect of a new record appearing at all seemed further and further away. Several years without a label, his only fresh appearances in the record racks coming in the shape of reissues and compilations, and a successful, often wonderful, autobiography seemed to mark a transition of sorts. Morrissey was probably not a pop star any more – he was an institution now content to comment rather than create.

In a rather unlikely turnaround, then, Morrissey signed a two-record deal with Capitol (using their Harvest imprint) at the beginning of this year, with World Peace Is None Of Your Business being the first fruit of the union; a challenging, often blindingly brilliant album that confounds expectation and, somewhat surprisingly, re-establishes Morrissey as a vital musical and lyrical force at just the moment when such a thing seemed impossible.

Musically World Peace… is absolutely fresh, sometimes purposely jagged and unpleasant, occasionally lush and expansive – the instrumentation absolutely demands your attention; the savage stomp of “Neal Cassady Drops Dead”, all violence and savagery until the bizarre flamenco solo is a great microcosm of this approach. One might not expect bright bursts of trumpet, the low hum of didgeridoo or the latino pop splash of an accordion but you’ll certainly get them – along with lashings of Q-chord and even a light dusting of dubstep wub-wub for bizarre, good measure.

Producer Joe Chicarelli has really brought out the detail of Morrissey’s band here, shining a light on their invention, managing to blend the seemingly incongruous with the more traditional tropes of the rock n’ roll backing band. What’s most heartening though is the sheer quality of songwriting and performance on display. Morrissey has worked with guitarist Boz Boorer as a co-writer for many years yet something has clearly reinvigorated the partnership that gave us classics like “Speedway” and “Jack The Ripper” such a long time ago. On “Istanbul”, Morrissey relates the sad tale of a father’s search for his estranged son, wrapped in luscious language like “Moonlight jumping through the trees/Sunken eyes avoiding me” while Boorer’s chords first create an atmosphere of alienation and frustration before soaring unexpectedly. It’s a minor revelation of a song – a strange jewel.

The pair triumph again on “Staircase At The University” which finds us in more familiar territory both lyrically and musically – Morrissey demolishing and ridiculing various forms of patriarchy and the educational system (“If you don’t get three As her sweet daddy said/You’re no child of mine and as far as I’m concerned you’re dead” he spits) while the music mirrors the progression of “Our Frank” before lurching off into a handclap pure-pop climax. Their most impressive work here comes on “Mountjoy”, the unbearably maudlin tale of Ireland’s notoriously unpleasant, violent prison of the same name. It’s slow, subtle and touching – “There is no one on this earth who I’d feel sad to leave” he croons, adding, crushingly “We all lose”. It’s a black veil of sadness that envelops the listener entirely, Morrissey’s voice a low, sad call.

Elsewhere there is the irresistible triumph of “The Bullfighter Dies” (“…and nobody cries/Because we all want the bull to survive.” Quite.) bundled with the throwaway joy of “Kiss Me A Lot”, representing the lighter side of Morrissey’co-writes with “new boy” Jesse Tobias (he’s only been around for about eight years) but this pairing have their moment of emotional resonance too, in the form of “Smiler With Knife”. Lyrically a cousin to “Hold On To Your Friends” and with a similar, yet far more unusual, musical tone it claws at the listener, a sensual death march with a fatale refrain that’s as addictive as the song is destructive.

Speaking of destruction it would be remiss not to mention the bold, nearly eight minute"I’m Not A Man”, in which we listen to a litany of male traits Morrissey could never share (“Ice man, warring cave man”, “Workaholic, thick-skinned, two-fisted” etc.) before coming to the thundering crux of the matter – ““I never would kill and eat an animal/I never would destroy this planet that I’m on” he cries before a keyboard surge and a wordless vocal melody to finish. It’s self-righteous to the point of self-parody but he certainly has a point – and when delivered with such a combination of force and grace it’s hard to disagree.

While “Kick The Bride Down The Aisle” apes the coda of “Please Please Please…” in its chorus and comes off as somewhat unnecessarily vicious (“Look at that cow…in the field/It knows more than your bride does now”), and the title track (and opener) seems to hold the same level of dislike for taxes as it does human rights violations these are not poor songs by any measure – in fact World Peace’s majestic middle eight “Each time you vote you support the process” is a personal lyrical highlight.

Certainly there is some clumsiness here – the “Babies full of rabies/rabies full of scabies” verse from “Neal Cassady” jars somewhat for instance, but Morrissey is largely on strong form here both lyrically and vocally – employing his warbling ticks and high-pitched twitches to grand effect as and when required.

The running order suggests that this record is a gauntlet to be thrown down – slotting an epic diatribe against masculinity in the number 3 spot that usually plays home to at least a potential hit will allow you such an inference – yet despite its sharp edges and sometimes brazen weirdness it’s a record that lets you in via the melodies, startles you with its arrangements, reaches out to you with its lyrics in a conspiratorial voice.

There is no sense of finality to World Peace…, even considering closer “Oboe Concerto” with its “Death Of A Disco Dancer” atmosphere and kiss-off lyrics “There’s a song I can’t stand/And it’s stuck in my head” and closing motif “The rhythm of life goes ‘round”, so we could be witnessing the beginning of a true renaissance. Regardless, what we have is a bold, sometimes unsettling record that represents Morrissey’s most interesting, engaged and utterly enthralling work since Vauxhall & I. It’s a remarkable record, and any fuss made here should have nothing to do with Morrissey’s persona, nothing to do with anything in fact, aside from what a tremendous achievement World Peace Is None Of Your Business really is. The prospect of this album should have any fan of inventive, addictive music trembling with anticipation.