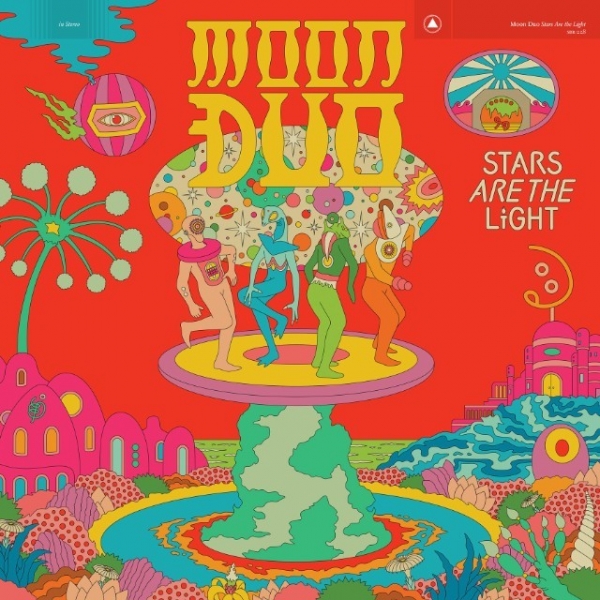 Although Moon Duo isostensibly a side-project of San Franciso four-piece Wooden Shjips, Ripley Johnson, lead singer/guitarist of both acts, has been keeping his best songs for the duo formed with his wife, Sanae Yamada.

Moon Duo eclipsed Wooden Shijps with their previous two albums, the diptych Occult Architecture Volume 1 and 2. Since the release of those albums back in 2017, Wooden Shijips released the passable V last year, while Yamada released a self-titled album under the guise Vive La Void, an excellent exploration of synthpop and krautrock. It's the former record which gives Stars Are The Light its strongest reference points.

The intense urgency of their previous albums is non-existent here, disco has been mentioned as an influence, an emphasis on 4/4 beats aside, it’s not evident in execution, the level of chill here, however, is the biggest change in the sound. Johnson’s brilliantly liquid style of guitar playing with a key element to the sound of previous albums whereas this time round guitar is a secondary instrument only used in flourishes, it’s Yamada’s hypnotic synth work which is at the forefront. It works superbly.

“Lost Heads”, a lethargic but danceable piece of space(d) disco takes its cue from late '70s keyboard-based acts such as Space or Telex, while the title track is a sweet electronic lullaby which could comfortably sit alongside Primal Scream’s most tripped-out moments on Screamadelica.

By using splashes of guitar as punctuation points, synth work is pushed to the forefront, this works wonders on “The World And The Sun” which takes a funky but meandering electronic track which goes nowhere, albeit pleasantly until washes of atmospheric synthwork elevates the track into glorious synthesized euphoria. Even better, “Lost Heads” has the duo’s vocals intertwining sweetly over the monotonous structure of electronica and nagging keyboard riffs, the otherworldy nature is akin to being awake in a dream.

“Eye 2 Eye” nods to past material, Johnson indulging in some thrillingly liquid psych guitar riffery, the Loop mixed by Spacemen 3 (ex three member Sonic Boom mixed the album), is the only moment of organised chaos on the album and really shakes up the record as whole. It’s a simple shift which could seem out of place done by a lesser band, here they casually throw in a trashy rock track as if it’s perfectly natural.

Stars Are The Light drifts unassumingly in a dreamlike state and although the key component of all of their albums up to this point is relegated to atmospherics, it’s a transition which has been made with ease. While some bands would make this shift as a ‘hey, we made an electronic record’, Moon Duo have done so with little fuss or fanfare, resulting in another great collection of songs.