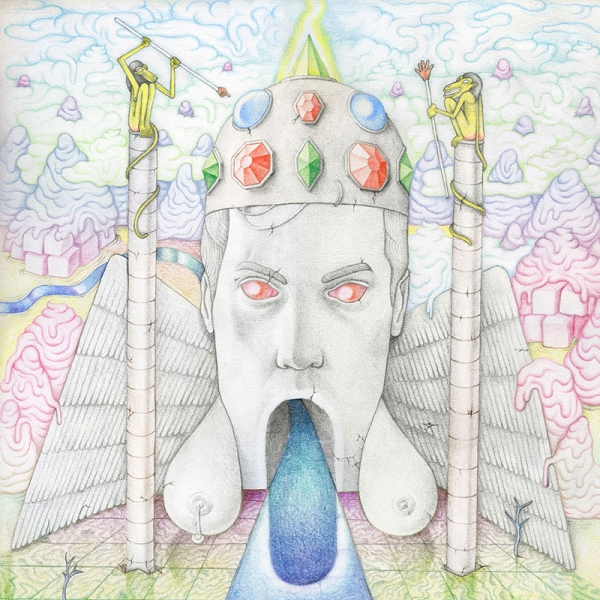 Full disclosure – I did study French each year of high school and an additional year in college, but that was many years ago. I recall the basics, I can read some still – probably enough to get the gist of a whole – I don’t know my verb tenses to be sure, and no way in hell could I converse or translate enough of what a fluent speaker would say to understand much of anything. Obviously, this makes Moodoid’s, the brainchild of Frenchman Pablo Padovani, debut full-length a challenge for me in the lyrical department. I know enough French to make out half or more of the song titles at least without Googling their translation, but aside from the English-titled and English-sung “Yes and You”, I’m a non-swimmer without a life vest amongst Le Monde Moo’s (“The World of Moo”) lyrical ocean.

You may be in the same boat (or lack thereof), but fear not! With risk of trivialising Padovani’s lyrical content, I bear the fantastic news that you needn’t understand a single word of Le Monde Moo (not even “Yes and You”) to blissfully fall prey to its opulent charms. Padovani’s father is a Parisian cult jazz musician and himself is a multi-instrumentalist with a voracious appetite for a slew of different pop/rock subgenres. Furthermore, he has spent time as a guitarist for fellow French act Melody’s Echo Chamber, an acolyte of Tame Impala’s ringleader, Kevin Parker, who also produced Moodoid’s debut EP. So, Padovani’s lineage, both in nature and nurture, is a strong one, reason enough to both expect a lofty dollop of ambition and for him to have impressively fulfilled it here on Le Monde Moo.

Now, one look at that album art above there, in conjunction with Padovani’s professed premise for the album – that we’re traversing some sort of phantasmagoric fantasy land of 24-hour discotheques packed full of girls whose skirts are purposefully that short and guys whose skinny jeans can barely contain that bulge in their pants – seems utterly ridiculous. And it is. The French have a way (call it a “je ne sais quoi”) with the absurd and the dressing up of debauchery into something seemingly elegant, and Padovani carries it off with a mélange of psych, prog, classical, and jazz – in other words, a mixture that, despite today’s increasingly fractious genre landscape, still rings as wholly obscene in 2014. Ah, but this is where his shrewd ingenuity shines through – where a lesser artist would err on either the side of conservative self-seriousness or uncontrolled, sloppy mayhem, he toes that line flawlessly.

Padovani has clearly adopted Kevin Parker’s gauzy, swirling psych sound, evident from the get go on the languorous opener, “Les Garcons Veulent de la Magie” (“The Boys Want Magic”). It’s a move that ensures that Le Monde Moo will retain some level of current sonic relevance, but Padovani’s simply not satisfied riding that coattail as he runs with it to the next stratosphere. Like a crushed velvet carpet runner, he unfurls the warm, nocturnal brilliance of “La Lune” (“The Moon”) and “Bleu est Le Feu” (“The Fire is Blue”), tossing in brilliant little details such as shades of buzzing sitar, a brief saxophone interlude, or the fevered crunch of fuzzed out electric guitar, that are essential embellishments without deterring from the main event. On the contrary, the album’s hedonistic stops of “Machine Metal”, “Bongo Bongo Club”, and “Heavy Metal Be Bop 2” feature him, in turn, mashing out dystopian synth-pop, manic calypso jazz (complete with a rap of sorts), and sly nu-disco funk, all three truly putting Arcade Fire’s Reflektor’s similar ambitions to shame.

Psychedelic music has always been about its transportative powers – or its intent for them, anyway. Its road is littered with those that take themselves too seriously, or not seriously enough; those that box themselves in, as well as those who didn’t set enough boundaries. Le Monde Moo is truly music to lose yourself in; to submit to its ability to genuinely take you to another world. Pablo Padovani pulls it off without a hitch; it’s a Technicolor madness that never goes fully insane; it’s taboo, sexy, and sensual without being salacious; it’s sincerely ridiculous and (gulp!) fun without being silly or slight. My only concern, and sincerest hope, for Padovani is that he can continue to mine the seemingly infinite wellspring of creativity he’s tapped into here without the roof caving in on him.