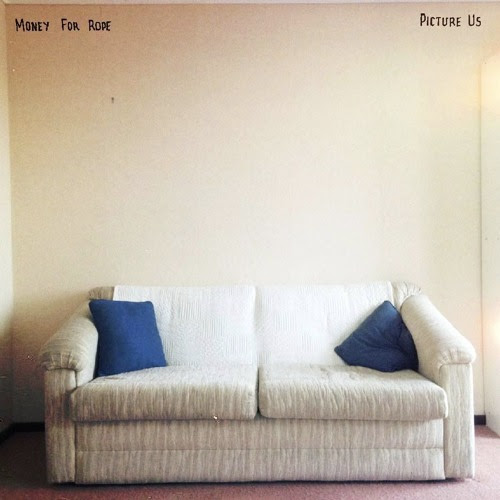 Money For Rope’s second album, Picture Us, begins with some uncharacteristic serenity.

The first two minutes of opening track “Hold” are just a wistful guitar melody and frontman Jules McKenzie, urging, in that impassioned way of his, to “put everything in, whether you like it or not”. The track then blasts into life for its remaining minute or so. Those opening two minutes are the calm before the storm that is the rest of this livewire album from the Melbourne five-piece. Lead single “Actually” follows, and it’s an immediate return to the band’s default state of existence: reckless, untamed, rough and ragged, wildly free.

The fivesome have been touring nonstop for a solid four years, and you get the impression that they enjoy being out in the world, being in perpetual motion, ever restless, dishing out their brand of raucous havoc wherever they set foot. They did manage to stay put for a whole summer though, in their native Australia. There, they pitched up at a beach house in Victoria, next to the Southern Ocean. It’s a stretch of coastline that’s as unforgiving as it is beautiful, and it’s ruggedness clearly rubbed off on the band. You can hear it, as well as that perpetual motion the group exist in, all over Picture Us.

“Actually” slithers and undulates as McKenzie brutally sets the scene: “I drive my car into a tree”. Safety first isn’t part of his – or the band’s – M.O. The track plays out like that very image, distorted guitars and drums crashing and tumbling all round. “Stretched My Neck” bites and crunches, its back-end a complete wig-out, that would be right at home in one of Guy Ritchie’s trademark scenes, where a whole bunch of shit is hitting the fan all at once. “Remember My Name” puts reverb-drenched keys front and centre, a swirling mass of whitewash, a squalling guitar eventually piercing through like a weather-beaten lighthouse. “Earl Grey” is a groovy slow-burner that builds and builds in tension, eventually coming smashing down, McKenzie all awash in its looming menace.

At this point you’re gasping for air, and you’ve been flung about like a rag doll by wave after wave of snaggy psych-garage-rock. But with final track “What Takes So Long” – just McKenzie, an acoustic guitar, and the comforting sounds of the band and friends chatting in the background – you have a chance to suck on that precious oxygen once again, and orientate yourself. And as much as you might’ve been panicking just a few minutes ago, you now realise how goddamn exhilarating that tumult you were caught up in was. That’s because Money For Rope “put everything in”. And when their ‘everything’ is as off-the-scale exciting, it's a thrilling listen.