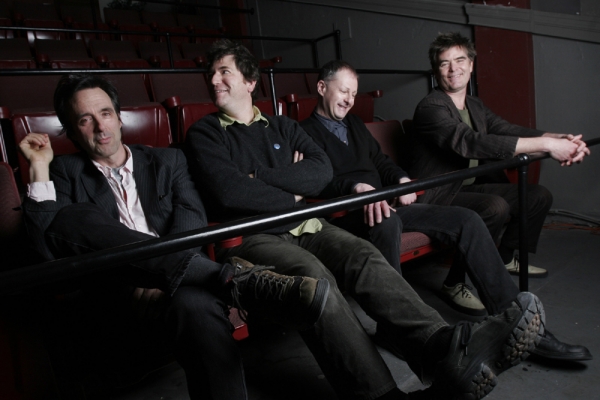 Boston’s Mission of Burma are in the strange position of having been reformed for longer than they were originally in existence, with Clint Conley, Roger Miller, and Peter Prescott (plus tape manipulator, the late Martin Swope) having come together in 1979 and split in 1983, releasing just one studio album, the peerless post-punk classic Vs and the wonderful EP Signals, Calls and Marches. I discovered the band through R.E.M. covering ‘Academy Fight Song’ and remember being equally disappointed and frustrated to find that they had split (due to guitarist Miller’s tinnitus) and hadn’t left that much recorded music. So it brought me joy unconfined when the band got back together in 2002, with Bob Weston of Shellac replacing Swope on tape manipulation – he stuck to Swope’s analogue methods rather than switch to digital methods or sampling. The band have since released three excellent albums in ONoffON, The Obliterati and The Sound, The Speed, The Light, and are one of the few, if not only, bands that have reformed and continued to be as good – if not at times better – as they were the first time around. The excellence continues with new album Unsound.

There have generally been two sides (occasionally three when drummer Prescott writes and sings) to Mission of Burma: the angular and the anthemic. The former is provided by Roger Miller – the man responsible for the classics ‘New Nails’ and ‘Max Ernst’ – who combines still-burning anger with obtuse lyrics and jerky time signatures, while the latter comes from bassist Conley – the man behind the best-known Burma songs ‘Academy Fight Song’ and ‘That’s When I Reach For My Revolver’ – who delivers hook after hook yet stays true to the band’s post-punk roots. The distinctive styles are evident in the opening three tracks: ‘Dust Devil’ is typical Miller, a short blast of punk, off-kilter rhythms and Miller wringing the last bits of life from his guitar; ‘Semi-Pseudo-Sort-Of-Plan’ captures Conley at his finest through juddering bass and a killer chorus; and ‘Sectionals in Mourning’ is the sound of a maniac bellowing in your ear at 5am. This fits in with the pattern of every other Peter Prescott track, and on this occasion he shouts his way through in the hope that “Sectionals in mourning” might become some sort of catchphrase. Whoever takes the songwriting reins matters not a jot: it’s always brilliant.

Despite press for the record stating that Mission of Burma pushed themselves out of their comfort zone on Unsound, with Miller swapping guitar for bass when writing (and Conley vice-versa), this is still unmistakably MoB from beginning to end, and the only surprise turn of events is the appearance of Bob Weston’s trumpet skills on a couple of tracks (‘ADD in Unison’, ‘What They Tell Me’) – but even then it fits around Burma’s style rather than sounding shoehorned in. It’s business as usual elsewhere with Miller ranting his way through the edgy ‘This Is Hi-Fi’ and blistering ‘Fell –> H20’ and Conley providing the sunny ‘Second Television’ (complete with vintage Prescott “yeah” yelps of delight in the background) and the astonishing ‘7’s’ which sounds like it was lifted straight from 1981 and despite being under two minutes in length is the best moment on the album.

For Mission of Burma to sound as essential and full of energy as they did 30 years ago is quite some achievement; they’re not doing anything different or bowing to new trends, but simply carrying on as if there was never a 20 year gap between Vs and ONoffON. With their legacy already secured MoB didn’t even have to come back and make any more records, but in creating Unsound they’ve just gone and made one of the albums of 2012.