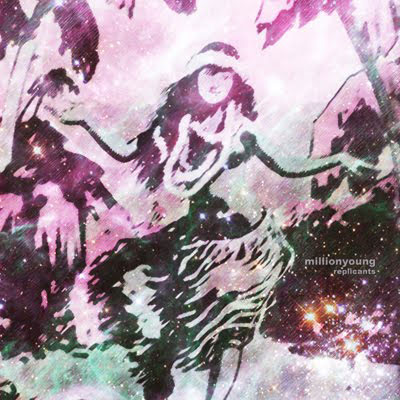 “You’re already transparent, and I’m already done” sings Mike Diaz on forthcoming single ‘Perfect Eyes’, marking one of the more lucid moments in this, the debut album from Millionyoung. Real understanding can be brought to bear on moments like these. It’s a pure insight into the whole show; scene by scene unravels before us. In this moment Millionyoung reveals the lightness of his touch, the easy grace of his production and the openness of his lyrics. ‘Perfect Eyes’ breathes with this kind of humility allowing Diaz’s wondering vocal to effortlessly delve into abstractions and ideas like dreams sunk into pennies beneath the clear water of a fountain. And so what you get here is this fragile foundation upon which great ideas are brought to life.

Millionyoung uses this great grace, or if you like, dexterity, to manoeuvre his way through the tracks, drawing inspiration from multiple sources. Thus, while ‘Obelisk’ and ‘Cosmonaut’ play heavily on a filtered psychedelic pop, ‘Easy Now’ is almost a funk revival track; displaying the smooth basslines akin to his contemporary Toro Y Moi’s latest, ‘Still Sound’. In fact watching Toro Y Moi play live during the summer months I witnessed his remarkable move towards a kind of funk-wave, and although it was still half-formed, it was played with real clarity. Although that’s a slight digression, the point is that early producers of the now iconic chillwave sound have moved on, playing with beats and basslines and wondering how to bring that into their music. In resemblance to Toro Y Moi’s progression from laid back mind-benders to up-tempo toe-tappers Millionyoung’s Replicants is a superb echo of this move. From the lurching up-tempo beats, swamped basslines and playful percussion Replicants takes tangible (if still baby) steps away from the most identifiable elements of his genre. Track’s take on different, mutated forms such as ‘On On’ which revolves around a simple house sample, likewise, ‘Sentimental’ adopts a calypso vibe that softens the end of the album towards its conclusion.

Replicants explores further and asks more questions of itself than most albums. It finds itself in dark alleys, smoke-filled dancefloors or on sun-drenched beaches. From start to finish the album progresses at a tremendous rate, assimilating styles and sounds, moving through the knee-high water created by its own wash at speed. For the most part it works well, finding firm footing in the great swelling of synths. However cracks do show, especially where the production is concerned, often leaving a dull, muzak inspired beat or worse, an unexciting drum sample that drags with it the quality of the song-writing. Of course, Diaz does well to make the 45 minutes work, and the production quality only seems apparent after one or two listens, leaving the ears tired from the stagnant quality of the samples.

Salvation remains however, and this comes from Diaz’s languorous vocals, his yearning and up-lifting melodies and the ease of his song-writing. Where tracks such as Gravity Feels lack edge, others promote the album stronger than anything he has done previously. Diaz throws himself into Replicants with conviction, attempting to diversify and grow his sound, and whilst a few efforts fail, most succeed with the usual listless energy.