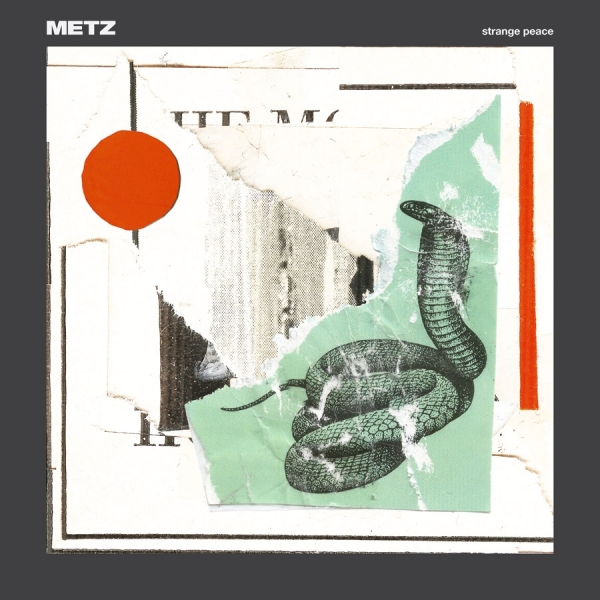 ​At the start of the decade, you could have made a strong argument that Canada was the best country in the world for new bands. Often just a cursory glance at the country’s annual Polaris Prize nominations list would show a treasure trove of exciting and disctinctive artists, and it was on the 2013 incarnation of said list that saw Metz’s self titled debut album lauded for its intensity.

Since then, the Toronto based trio have firmly stuck to their DIY ideals, building a reputation for crafting full throttle, low down and dirty garage rock. It was a fair expectation that new album Strange Peace would feature eleven songs anchored on a bed of sonic venting and controlled chaos, and their third record does indeed largely follow their two prior in being a riff heavy and riotous affair.

Like many hard touring, modern day noise bands, Metz have cut their teeth in the live environment, which possibly explains why they sought out Shellac's Steve Albini to engineer the recording of Strange Peace. As with all Albini-hemmed albums, it captures the very essence of their riotous gigs, and given this is an area where Metz excel, it's resulted in an LP that shows them at their most natural.

Metz have much in common with Sub Pop label mates Pissed Jeans, but for all their ability to be able to write a three minute riff burster; it's a formula that can ultimately become both tiring and predictable. Whilst songs such as "Cellophane" and "Common Trash" largely stick to an oft-used noise punk template, it's a relief that there's enough to suggest that Metz are edging towards new territory elsewhere. The formula is varied on "Lost in the Blank City", where it edges towards self titled era Liars territory with its intermitting rhythm and near on-going heavy wall of noise, and there’s a slight Sonic Youth influence within "Sink", where cyclical harmonic chimes intersperse with hypnotic bursts of frantic noise.

With Strange Peace, Metz have created an album that still largely has one foot rooted in the best of their past, but sees the other stretching forward into a future that is just as riotous. Long may it continue.