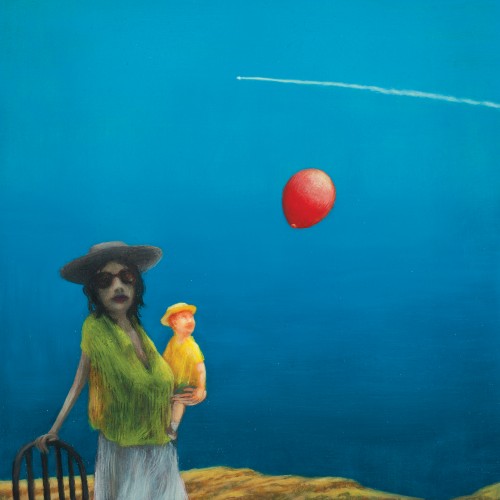 With an integral third of the band, Brent Kopf, jumping ship last year to focus on solo work as Ramona Falls, Portland indie rock trio Menomena were swiftly reduced to a mere duo in founding members Justin Harris and Danny Seim. Where many a lesser act would have buckled at the knees, the old friends realigned their efforts to induce what they claim to be the band’s most focused effort to date; a quasi-concept album about parents, parenting and, most tellingly, their respective relationships with their own mothers. With the departure of Kopf firmly in mind, is Moms Menomena’s latter-day realisation of a coherent middle ground beyond their decade-long art rock experimentation?

From the first few bars of opener ‘Plumage’, it’s clear that something – if not many things – has changed. A declaration of foreboding love and supra-existential self-diagnosis, full of terse declarations of ineptitude bubbling beneath a sweet veneer of cascading pop and the occasional piece of quick-witted repartee – i.e. “’I once was tragically hip and beautifully fine/Now my beautiful hips are tragically wide” – the content is notably to the point. With previous full-length endeavours such as 2010’s Mines resembling a thematic Rorschach blot of sorts, the band have regressed to the refined; straight-up, semi-psychoanalytical statements making for a cultivated, voyeuristic trip.

Whilst the disjointed fuzz-pop of ‘Capsule’ resuscitates the band’s surrealist tangents, early highlight ‘Pique’ resumes the recurring first-person admissions; yet another song serving as a sonic confessional, the cathartic (if not innately therapeutic) value of capturing thoughts such as “When I grew up you grew lonely/Now I can’t be what you need” serving as Harris’ most unambiguous open letter to his own mother. Contextually, with Seim confronting the death of his mother and Harris reflecting upon being raised by a single mother, there can be doubt that the duo share a plentiful well from which to delve for the occasional heavily-meant assertion. Ultimately, there’s a sense that everything has come full circle: the reference points become the content and the shadow of Kopf incidentally reaffirming the notion that, upbringing aside, we’re makers of our own destiny.

Whilst clearly aiming for clarity, the classic Menomena sense of playfulness is in abundance on Moms, coursing chord progressions and burrowing melodic phrases never impressing at the expense of lucidity or instant impact. The vivacious, bass-led ‘Baton’, for example, with its spurts of organ, is a masterful stroke of layered noise pop, a Bonham-esque groove proving roguish without descending into outright frivolity. ‘Heavy Is As Heavy Does’, on the other hand, calls to mind The Antlers, Eels (‘Son of a Bitch’) and Hope of the States circa The Lost Riots to summon the record’s most cutting and earnest remarks in “As prideful as a man he was, proud my father never was of me” and “Among 6 billion people, I want the ones who never wanted me”. With its mid-point surge – a crashing overture propelled by a decidedly Coxon-like solo – it makes for an emphatic peak; a purge not necessarily bound by a sense of overwhelming sadness. More than anything else, it’s this keen balance between poignancy and good humour that best defines Moms.

In the end, there’s a lot to be said for taking something innately problematic and moulding it into something fundamentally precious. Whether or not it can be considered a concept album, Moms is firmly concerned with the workings of becoming an adult and learning to accept that disappointment and pain are inseparable from gaining a sense of one’s place in the world. With the additions of flute and cello thickening their palette – not to mention Seim’s synth work being given more room to flourish – heart and soul permeate the length and breadth of the record. While Mines was more concerned with abstract glories and exulted fantasy, Moms feels like a personal journey; a chronicle of wanderlust for the perpetually bed-bound. While it could certainly be more musically ambitious, taking five songs each, Harris and Seim’s private tales betray a vulnerability to be cherished.