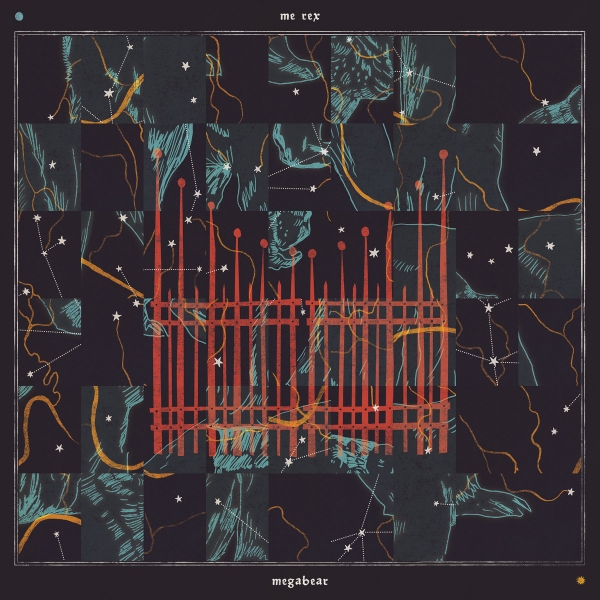 Megabear, the debut album from London indie punk outfit ME REX, is built around a one-of-a-kind proposition; a 52-track album, intended to be played in any conceivable order.

It’s a tall order to restructure the entire album concept for your debut. Yet, even more surprising than their ambition is the commitment to the concept shown on Megabear. The band have crafted their debut with an uncommon degree of love and care and, in turn, deliver a record that rewards the same devotion from listeners.

It’d likely be easy to write off the concept as a gimmick, but surprisingly most combinations on the record provide a near seamless listen. Each track leads into the next with only the instrumentals providing respite from frontman Myles McCabe trademark barrage of literate lyricism. Together the tracks form an endlessly flowing river of music, with each 30 seconds to a minute bringing a subtle new shift to the sound of the record, all while retaining enough core qualities to make the transitions at the center of the album work.

Even so, the band does stumble into repetition occasionally. A few choruses run rife over the album, with each forming the lyrics of a handful of tracks. Notably, “The party / The party's never over” and “I want a river to run through me / Carve out a valley deep, deep, deep” appear most consistently. Depending on your tracklisting, these may end up becoming repetitive, or may be simply central motifs interspersed throughout. Megabear is an album of contradictions, at once repeating these central choruses and yet constantly shifting its presentation of them.

With these motifs in place, Megabear feels less like an album of starkly different ideas and more like a single, constantly shifting, song. However, Myles and company play with the central formula to keep it fresh, incorporating jaunty piano rock, soulful stadium ballads, a spacey ambient track, and sprawling synth soundscapes. A few songs change keys, a handful of others change time signatures, but overall the band stay relatively circumscribed to the brand of wordy indie rock they brought to life with their excellent Triceratops and Stegosaurus EPs. Fortunately, the short song lengths help keep the record feeling varied, each track a tiny jewel of confessional emo pop songwriting.

Then, does Megabear deliver on the central premise? Once again, the record presents a contradiction. The band succeeds in a monumental undertaking to seamlessly fit these 52 tracks together, but, unsurprisingly, not every one of the nearly infinite combinations works well as a full record. Some tracklistings provide abrupt screeching ends to the record, others fall into repetition, and still others chop up the album’s flow in jarring ways.

But each play, whether messy or transcendent, feels like a subtly different experience, unearthing new nuggets of gorgeously placed melody. Some of these newly discovered combinations come to feel like the definitive way to listen to the record. I can’t wait to spend even more time with the album, fitting each song together like a puzzle-piece into my own favored tracklisting. In this way, Megabear is something truly special—not only an album of moving songwriting and carefully considered craftsmanship, but an album that each listener can make their own in whatever way they see fit.