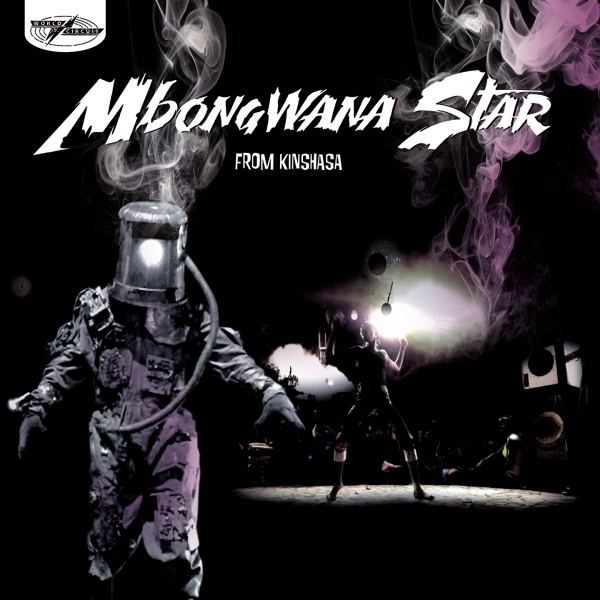 A couple of spins of From Kinshasa, and those triumphs suddenly sound a bit too predictably tied up to tradition. A collaboration between Paris-based producer Liam 'Doctor L' Farrell and a new seven piece built around the nucleus of Staff Benda Bilili, Mbongwana Star's startlingly fresh debut quickly wipes out any sadness caused by the demise of the internationally renowned outfit from Kinshasa, DR Congo, who sadly disintegrated under the weight of their success after two albums and starring in the acclaimed documentary Benda Bilili.

Even with the uncharacteristically laidback "Coco Blues" and the sunny vibes of "Suzanna" providing consoling glimpses of what music from Congo 'should' sound like, purists and traditionalists will inevitably weep bitter tears upon encountering this fearlessly adventurous mash-up. For here's a record that actually makes the clunky term 'World Music' seem totally appropriate.

Mbongwana translates as 'change', and that's precisely what Coco Ngambali and Theo Nzonza - aided and abetted by a gathering of young Kinshasa musicians - dish out here with head-spinning audacity. Frequently, From Kinshasa doesn't only sound unchained to the musical templates of any particular continent, region, country or city, but it also seems to have given up trying to adhere to the rules and regulations of earthly grooves.

Although it sounds absolutely nothing like them, the hyperactively percussive yet still sparingly upholstered From Kinshasa brings to mind both Jamie xx's Gil Scott Heron reboot We're New Here and Sun Araw and M Geddes Gengras's psychedelic dub workout with roots legends The Congos (Icon Give Life), in the sense that it exists in a musical no man's land that neither party - nor anyone else - has trod on before. Recorded with the same acute aversion to audio niceties that pepper the output of fellow Kinshasa noise merchants Konono No. 1 (whose finger pianos and chants help elevate first single "Malukayi" to truly interstellar levels of singularly unsteady but unstoppable funkiness), albeit with a much keener ear for addictive hooks, From Kinshasa managed to sound utterly futuristic and profoundly in tune with the space age whilst also giving the distinct impression that it's been built out of rusty materials  (witness the phlegm-y guitar riffs that power up the mysterious mood of "Kimpala") scavenged from the scrap heaps of Kinshasa's shanties.

From the mutant disco of "Masobele" - complete with Nile Rodgers-y chicken scratch funk guitar - to the mad hyperactivity of "Nganshe", powered by an unpredictably bouncing beat that brings to mind a caffeinated frog hopping endlessly inside a tin can, From Kinshasa is a distorted transmission of a sound of a city, but it's not the neatly paved, orderly and predominantly functioning type of town most of us are used to.