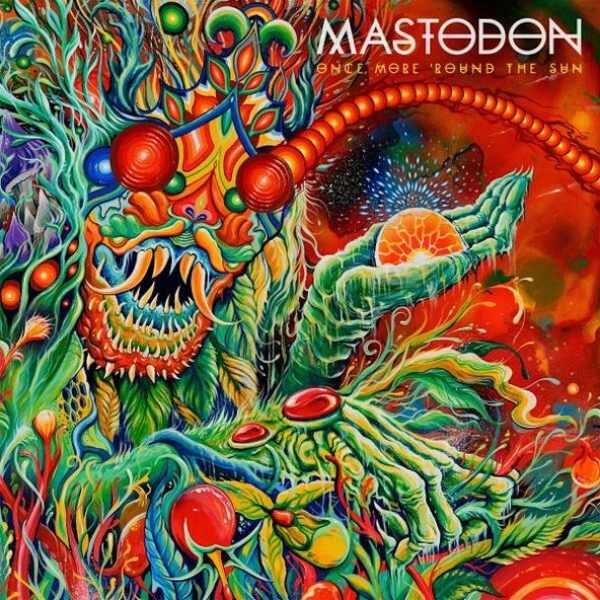 Probably the most prominent piece of exposure that Mastodon have enjoyed to date - in Britain, at least - is an appearance on Later…with Jools Holland back in October of 2011, when they were promoting their last full-length, The Hunter. Given that the show - like the Mercury Prize - prides itself on diversity whilst simultaneously demonstrating a serious phobia of metal, you had to wonder what it was about the Atlantans that saw them break that particular mould; the only other metal act I can remember making the cut is Metallica, with Lou Reed, playing songs from that record that should really be erased from official records out of reverence for the great man.

The Hunter was rapturously received by critics, and broke the top ten in the U.S.; it’s certainly the nearest thing the band have had to a breakthrough, and so they should be looking to build on that success with Once More ‘Round the Sun. Opener “Tread Lightly” (a Breaking Bad reference? Surely) adheres to the same bent that the last album followed, with their old taste for prog largely eschewed; after a brief acoustic intro, it maintains the same blistering pace throughout, overlapping guitar lines battling for prominence with a vicious vocal from Troy Sanders.

In fact, there’s only really hints of the band’s progressive side early on. “The Motherload” features some eccentric drumming, but the solos are short and sharp, and there’s certainly nothing new about the vocal back-and-forth between Sanders and Brann Dailor. Similarly, the two-tiered soloing towards the end of “High Road” is a nudge back towards The Hunter - although for the most part, the guitar playing’s monotonously guttural. The title track, which relies on Hinds’ less aggressive delivery, is really only superficially a metal song at all; sure, the guitars sound heavy enough and it’s plenty pacy, but the arrangements really hint at something softer.

And there, really, lies the truth about Once More ‘Round the Sun; it’s not just that Mastodon are leaving their progressive side behind, but - to a degree - their very identity as a metal outfit. Sitting behind the production desk on this album was Nick Raskulinecz, who’s probably best known for his work with Foo Fighters - in particular, In Your Honor, which was the moment that they stepped irretrievably into dad-rock territory. As much as I don’t think I’ll be buying my own dad Mastodon tickets any time soon (to be fair, he hates the Foos - still more of a Stones man) you can see what I mean on Once More ‘Round the Sun; it’s still a metal record on the surface, but scratch just a little beneath it and you can pretty quickly spot all the hallmarks of arena rock.

It’s just little touches - the instrumental breakdowns on “Chimes at Midnight”, “Asleep in the Deep”’s alternately soothing and soaring vocals, the hard-rock-by-numbers guitars that run through “Halloween” - but they certainly all add up to form a bigger picture. The other real giveaway are the lyrics; previously, Mastodon would really run the gamut in this respect, from relatively straightforward metal tropes (“Crack the Skye”’s talk of “blessed visionaries” and rivers of blood) to references to Rakshasa demons on their third LP, Blood Mountain; their second, meanwhile, was loosely based on Moby-Dick. This time around, though, they seem to have gotten a whole lot more generic; “Chimes at Midnight”, for instance (“will I ever see your face again/or will black be all I know?”)

As heavy, hard rock records go, Once More ‘Round the Sun isn’t necessarily a bad one; it’s just that it seems, like The Hunter before it, to be nudging Mastodon further and further away from what made them stand out in the first place. Perhaps, in that, I have an answer as to what they were doing on a show as flatly anti-metal as Jools Holland; they’re certainly sounding much more commercially viable these days.