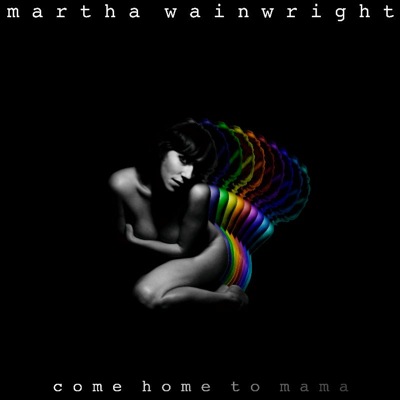 It’s a fact of life: some debut albums are impossible to better. Martha Wainwright’s eponymous first offering from 2005 was an instance in point, achieving as it did a certain degree of perfection. It was a record on which the writing, production and performance complemented each other so well that none of its songs warranted skipping. Remarkably, it manages to sound as relevant and fresh today as it did seven years ago.

Wainwright’s subsequent long-players were not without their charms, yet they saw comparatively diminishing returns, both in quality and acclaim: 2008’s I Know You’re Married But I’ve Got Feelings Too started off promisingly (with the excellent ‘Bleeding All Over You’ and ‘You Cheated Me’) but gradually lost its oomph from around the half-way mark. The following year’s Piaf tribute, Sans Fusils, Ni Souliers, à Paris, was often gratifying but its esoteric nature did not encourage repeat spins.

Can Wainwright’s new record, Come Home to Mama, reverse this musical path back towards the splendour of her debut? Let’s not keep you in suspense: it doesn’t. Nevertheless, whilst the overall effort stalls somewhere between “okay” and “good”, Come Home to Mama does offer some beautiful moments and, occasionally, nuggets of lyrical greatness.

Said to be informed by, and written in the aftermath of, her mother Kate McGarrigle’s death, Wainwright’s intentions for this album are not wholly clear. Sonically, it is not particularly melancholy or mournful, nor does it feel like a celebration of McGarrigle’s life. Instead, the record comes across as a collection of ten random tracks, most of which have something to recommend them although their common thread is not readily discernible.

Interestingly, the biggest highlight on Come Home to Mama is a recording of ‘Proserpina’, the last song written by McGarrigle before she sadly passed away in January 2010. Here, Wainwright can be heard at her most vulnerable, as she tells the story of Ceres’ forging of the seasons in retaliation to Pluto’s abduction of her daughter. With a stunning vocal delivery and a sombre piano, ‘Proserpina’ is the album’s chills and goosebumps generator. Sadly, other than the touching penultimate track, ‘All Your Clothes’, nothing else comes close.

As for the aforementioned nuggets of lyrical brilliance, ‘Can You Believe It’ obliges playfully, with Wainwright singing: “I really like make up sex/It’s the only kind I ever get” as well as: “I need you like a baby needs to suck his thumb”. It’s one of the album’s more instant numbers and, alongside ‘I Wanna Make An Arrest’, will undoubtedly become a live set favourite.

‘I Am Sorry’ is not the most obvious choice for album opener but it does offer an almost uncomfortably voyeuristic glimpse into Wainwright’s marriage with Brad Albetta. Notably, Albetta, who holds most of the production credits on Wainwright’s previous output, accrues musician credits only this time round, as Cibo Matto’s Yuka C Honda takes on the producer’s role. Come Home to Mama‘s press release suggests that Wainwright chose not to have the album produced by Albetta so as to “add a feminine touch”. Ultimately, however, the record’s production and sound do not give an altogether different feel to those yielded by Albetta in the past, which seems like a missed opportunity.

Elsewhere on the album, ‘Four Black Sheep’ flirts with a slightly more electronic sound for Wainwright, which she should definitely explore further, and ‘Radio Star’ – apparently written out of fear of an apocalypse – balances its challenging structure with a rewarding intensity.

Come Home to Mama is not a cohesive or instant record but Wainwright’s superb voice and the record’s several moments of brilliance mean that, although it’s not a patch on her stellar debut, this latest offering nevertheless confirms Wainwright as an important singer-songwriter of our time.

Listen to Come Home to Mama