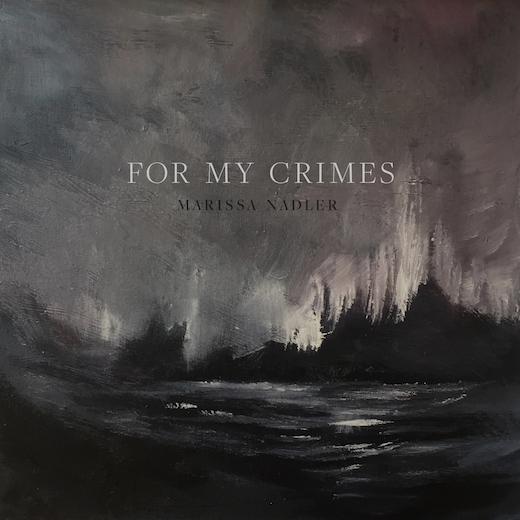 There is a stoic beauty in those who can hold onto what made them so special in the first place while continuing to forge new paths.

For My Crimes, Marissa Nadler’s eighth album, is not some radical revolution of persona and sound; it is in fact a studiously quiet evolution, whereby Nadler continues to cement herself as a uniquely powerful voice, a crashing wave amongst a sea of gentle swells and breaks.

Nadler reportedly wrote a number of songs for this album during a short but intense period before going into the studio, replacing numerous demos she had made on the road while touring. This is reflected in the urgency of For My Crimes, a set of songs that Nadler could seemingly no longer contain.

Deeply rooted in southern Americana, the folksiness of previous releases increasingly gives way to subtle country influences. The bleak correctional facility setting and first person storytelling of the title track traces a faint line to Cash, but the sorrowful tone is closer to his latter day American Recordings than when he mused on time dragging by at Folsom. Posited as a tale of a prisoner on death row begging not to be remembered for their misdemeanours, it’s hard not to apply it to the breakdown of a relationship where one pleads with the other to only remember the good times.

“Blue Vapor” is a towering highlight, with its hypnotic driving strum and deep ominous strings that reverberate through the hollows of your bones. As the drums kick in courtesy of Patty Schemel any previous fragility of the record is shattered as the track twists and lurches to its own demise. It would be remiss not to mention the guest vocals on this album provided by Sharon Van Etten, Angel Olsen and Kristin Kontrol. In a celebration of what are some the most exciting acts of the moment, each provide their own subtle yet inimitable stamp on the record without once crowding Nadler’s narrative.

For My Crimes contains plenty of darkness and light, an area Nadler has always specialised in. As crystalline electric guitar lines twang it would be easy to be swept away on the breeze of songs such as “All Out of Catastrophes”. That is until your attention is arrested by a devastating line, or as in the case of “You’re Only Harmless When You Sleep”, you ponder that song title a little too long.

And that is how Nadler gets you. There is a brooding menace beneath even the lightest of moments. As you are engrossed in the beauty and elegance of her songs and lulled by her vintage, perfectly distilled voice, dark tendrils are wrapping themselves around you, dragging you deeper down into the record with her.

It is for exactly that reason For My Crimes is such a rewarding listen. It could easily be described as a heartbreak album, but it is more than that. It is a set of perfectly framed folk songs that create a ghostly echo of a relationship breaking down, not because the love has disappeared, but that outside circumstances have just made it impossible. That is not to say it is a desolate tale, devoid of any hope or brevity. Like a ship smashed against the rocks, although irreparable, Nadler is all too aware that there is still lightness and humour to be found sifting through the wreckage.

Far from showing signs of slowing down, Nadler sounds more focussed here than ever, continuing to challenge herself and evolve, with her eyes fixed firmly on the horizon.