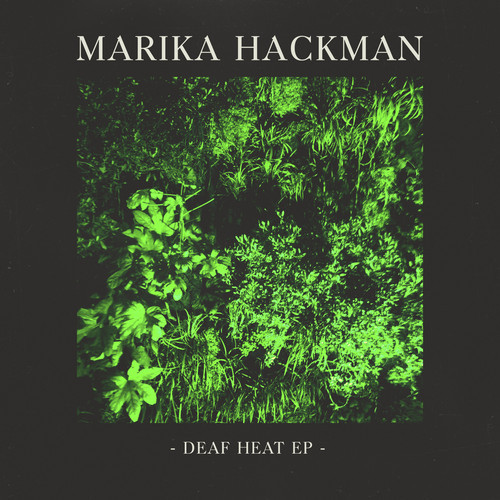 Whilst it is not quite yet a name on everyone’s lips, the whispers about Marika Hackman just keep on getting louder and louder with every passing EP. Deaf Heat is now the third in that noble line, consolidating as it does all the early promise of its two predecessors – last year’s offerings, That Iron Taste and Sugar Blind – yet at each turn moving ever further away from what was their quintessential beating folk heart as Hackman continues to develop her sound into something that is drawn from a much deeper, darker and more abstract creative well.

With its quiet dignity and spiritual calm, the choral reverence of “Tongues” inspires a hopeless devotion in the listener before the first of the EP’s four songs gently cedes into the tribal insistence of “Deep Green”. Here Hackman’s voice assumes a celestial quality all of its very own, floating somewhere beyond a point where mediaeval music meets with the modern dance. Yet for all of the song’s apparent ebullience, there lies an emotional vulnerability just beneath its skin. “Better to love than to have and to hold”, Hackman suggests, and you begin to sense that Deaf Heat may have emerged from a more turbulent period in her life.

As she did on Sugar Blind, Marika Hackman concludes Deaf Heat with a cover. Whereas on her last EP she chose Joanna Newsom, this time it is Lykke Li to whom she goes for her source material. Here she takes the Swede’s “I Follow Rivers”, slows the original right down, strips it of any extraneous electronic percussion but having done so loses none of the song’s ethereal detachment and forlorn beauty. But with its inherent sexuality and those ambitious time changes that flit between gothic melodrama and neo-psychedelic fairy tale, it is perhaps the previous track “Call Off The Dogs” which is a far more accurate barometer of how far Hackman has travelled in such a very short space of time. This is the sound of an artist who continues to evolve, continues to progress and who with Deaf Heat has now just produced a masterful record of tremendous maturity, sensuality and no little pain. The arrival of her first full-length album later this year is awaited with great anticipation.