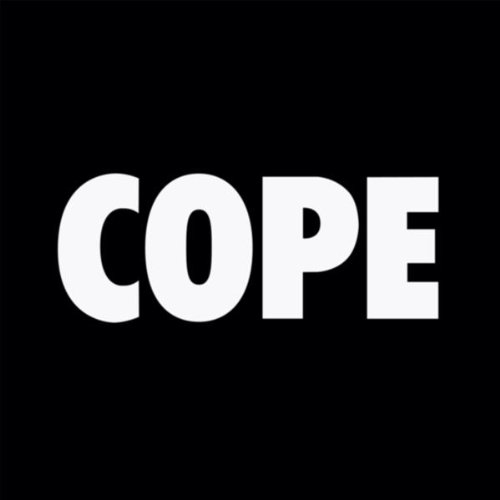 What’s black and white and red all over? There have been a few answers to the question, but according to Manchester Orchestra frontman Andy Hull – who formed the Atlanta-based, mildly Manchester-music influenced band a decade ago – they are the three colours of Cope, their fourth studio album. While 2011’s Simple Math varied in speed and style, here things are even more straightforward. Hull’s intended colour scheme is an exact match with the paint chart, with Cope offering eleven monochrome melodies with hints of love, blood, fury and shame. In a red-top paper sort of fashion (one of the questions many answers), each track – with just one song making it past the four minute mark – goes straight to the main story, ignoring flowery details for the dirt.

And it’s not all red roses, with Hull (along with guitarist Robert McDowell, keyboardist Chris Freeman, bassist Andy Prince and drummer Tim Very) delivering dramatic tracks with image-heavy lyrics, and short stories through tones with an almost sweet edge and instrumentation born from dark clouds. “Top Notch” is a storm of a starter, with bursts of thunder and lightning between calm, narrative verses in an almost theatrical fashion. “We all believed in ghosts until you walked into the walls,” Hull sings, in one of many lines that are both simple and thought-provokingly striking. The storm continues to wreak havoc throughout, with the tornado-de-force of “Trees” striking up enough strength to fell a forest. Anybody unaware of the band and expecting brash Mancunian brass may be disappointed, but they wouldn’t be able to argue with the swirling symphonies that the strings offer here.

A little more colour is hinted at (off whites, perhaps) with “The Ocean”, a song that rides on waves of various strengths, with the ripples of the verses making way for a crashing chorus and a wail of “I give you to the ocean.” It’s not the only nautical reference, either: “Choose You” – which instantly seems a little more mainstream – begins with another sharp/obvious observation (“The invention of the ship was the invention of the shipwreck”) while next track “Girl Harbour” is similar in delivery, but one of a few moments where Hull’s vocals are pushed so far they’re almost overboard.

Back on dry land – and despite its instant hit – the slow, chugging verse of “The Mansion” (“I was painted grey”) are arguably more dramatic than the few second flashes of riproaring guitar due to its difference from the rest of the LP. The band have clearly found it easy to cope with their blueprint of a collection that’s “brutal and pounding you over the head with every track”, but if they all deliver blows with the same weapon the listener may be left feeling disorientated, and struggling to distinguish between songs.

Manchester’s Orchestra’s success highlights an ability to create heavy rock moments that don’t drag their audience down: “Every Stone” and “All I Really Wanted” are rich in stomping drums and soaring guitars, with the latter in the style of a whirlwind of a waltz. Unfortunately, what Cope lacks are the moments that are naturally lighter – the airy title track of Simple Math and “Virgin”, which manages to calculate something between it and the growl heard throughout Cope, which is deeper during this albums title track. It certainly sounds like black and white and red, but while it’s quite clearly in a better way than a sunburnt penguin, its attempts at something completely dramatic and bold aren’t quite as successful as Spielberg’s iconic scene.