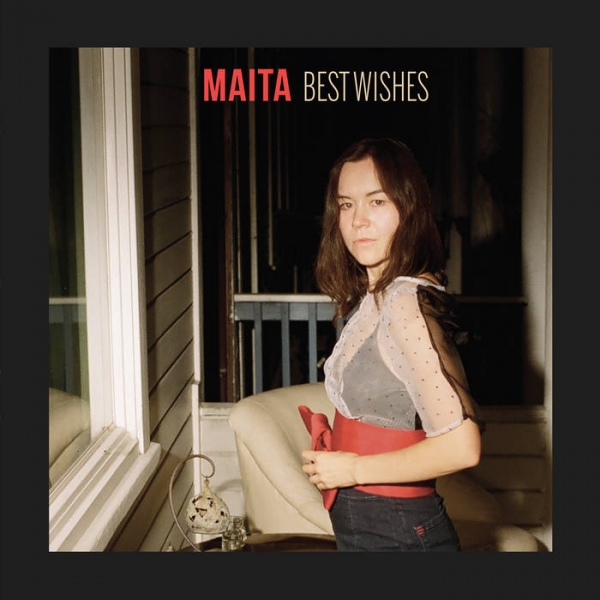 Very few people are able to portray the image they hold of themselves in their head to the outside world. This thought hangs heavy on the mind of Maria Maita-Keppeler; vocalist, guitarist and songwriter behind Portland, Oregon’s MAITA.

Throughout the band’s debut Best Wishes her lyrics are the shrapnel that linger long after the blasts of power pop and misty-eyed folk laments have come to an end.

“Music has been a place for me to demand the free space to say what I want to say”, states Maita-Keppeler. It is a space she uses to explore the pain and disenchantment of a generation that has had the rug pulled from under them. Who were promised limitless possibilities but now face little to no opportunities (“I hate pouring tea / it’s not what I studied to do” – “Japanese Waitress”), and see gentrification destroying the places they had made their own, taking their hopes and loves with them (“People fall into debt and they fall out of love / And they look down the street and say I knew you once” – “Best Wishes, XO, Hugs and Kisses, Goodbye”).

Turning her gaze inwards, Maita-Keppler also digs at the roots of her own perceived failure to speak plainly to the world around her. Best Wishes despairs at an overarching desire to please, and a social climate in which to speak out is to risk losing what little we have in the first place. (“And all the lonely parts / They won’t speak…And all the Angry parts / They’ve hidden their teeth deep in the dark” – “Perfect Heart”). Elsewhere as the group shift gear into the rapid acoustic guitar strums and knocking drums of “I’m Afraid Of Everything” we hear her sing “I should want what all folks want / to love and be thought kindly of”. It is a heart-breaking line, underlining how a weight of expectation is keeping her boxed in. The ability to capture the nagging pains that can hollow you out draws parallels with the bands record labels - Kill Rock Stars - most famous alumni, Elliot Smith. Both possess a turn of phrase capable of enlightening and crushing simultaneously.

The moments of introspective grace on Best Wishes are more than matched by the gleeful grunge of “Can’t Blame a Kid” and Fountains of Wayne influenced “Pay to Play”. They provide the glimmers of glitter in the dirt, and a much-needed reminder to try and not take life too seriously.

Best Wishes is proof that as hard as it may be there is always time for change and to begin to project the person we really are. Maita-Keppeler seems to have come to terms with the fact that this may be a slow process, but until then she has the space to be who she truly is in the art that she creates.