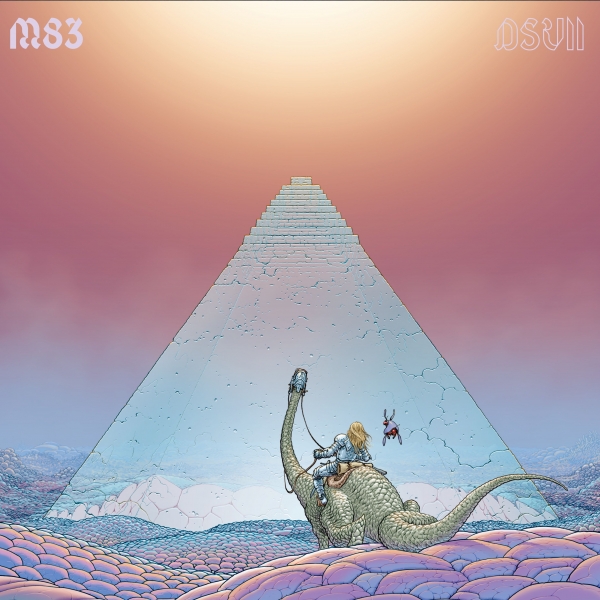 With DSVII, the long-awaited follow-up to 2007’s Digital Shades Vol. 1, Anthony Gonzalez opts to remain in the comfort of stasis.

This far into his career, we’ve come to expect a variation of what Gonzalez will deliver during his search to perfect his take on expansive, monumental sound. But even while the project of M83 has dipped in and out of relevancy from film score flops, to the near-perfect Dead Cities, Red Seas & Lost Ghosts, and even 2016’s problematic Junk, DSVII serves nothing more than a varied collection of B-sides, some of which shine magnificently whereas a majority disappoint.

Gonzalez likely never anticipated the fame that would be attached to his name, at least not to the extent in which it occurred. But while the project of M83 has hit an exceptional stride with most all of their releases, it wasn’t until 2011 where Hurry Up, We’re Dreaming put them on the map. This in particularly was due to its mega-single, “Midnight City” – a track garnered with international acclaim that cameoed in every way imaginable – from television spots and accolades all around, it was the track that paved the way for their peak. But as M83’s high gradually lessened, Gonzalez’s output teetered with it, proving more difficult to maintain that spot. This decline was justified from his okay-to-not-so-savory film scores atop of Junk – a vexing LP based around Gonzalez’s never-ending search for nostalgia.

In this case, though, it may be easier to give DSVII a pass. Although an official M83 release, it still doesn’t necessarily resemble one. Structurally speaking, it echoes more a film score, which is where Gonzalez’s headspace has been firmly planted for some time now. This mindset is upheld by his press release where he states: “At first there was this vivid memory of Dungeons and Dragons, this childhood sensation of living in an imaginary world set in a faraway past or a lost future…solitary knights, dreamy landscapes, strange animals, forgotten myths and old spells…” But even in all its nerdery, the contrast between the two volumes are quite varied.

Recorded between Before the Dawn Heals Us and Saturdays = Youth, Digital Shades, Vol. 1 explored sonic textures of ambient electronics – all of which could have been exemplary interludes on either aforementioned LPs, but while its minimal overlap provided a fluidity to M83’s discography, DSVII feels like its own entity of competing ideas, some of which make the grade. Tracks like “Lunar Son” hold the balladry and whimsy of an Elton John cut whereas the stunning “Mirage” beams with symphonic beauty as likely DSVII’s strongest song. With sound destined for the big screen, its somber ebb and flow washes over, leaving you transformed and devasted by its end. “Lune De Fiel” summons a futuristic utopia while “Colonies” embraces a mixture of ambient and digital swell, recalling the genius behind Dead Cities… or perhaps a slight nod to Tim Hecker. Even LP closer, “Temple of Sorrow” holds promise as its tempo quietly saunters along before breaking with sharp, grand electronics.

But even as Gonzalez drops a scattering of impressive moments throughout DSVII, others simply fail to make the cut. The ambitious opener, “Hell Riders” has potential, but remains a cluttered, hackneyed endeavor proving immediately in that Gonzalez remains hard-pressed to find a quintessential, epic moment. The elaborate “A Word of Wisdom” is a two-minute, flowery addition with humming female vocals while “Feelings” is held entirely together by warbled synth and wood flute. But shortly in, Gonzalez incorporates an array of angelic choirs into the mix, those of which subtly recall Danny Elfman’s score for the '90s cult-classic, Edward Scissorhands. “A Taste of the Dusk” clicks like a metronome with brightly keys but fails to manifest into anything worthwhile while “Oh Yes You’re There, Everyday”’s structure falls flat.

Yet, while these tracks aren’t necessarily bad by any definition, they certainly lack the charisma that M83 is known for. To be clear: DSVII is primed for Gonzalez’s diehards, but as a release by itself or even paired alongside a hypothetical video game, there may be more wiggle room to give the LP additional praise. But even here, Gonzalez is aware and covering his tracks: "With DSVII, I wanted to come back with something stronger that featured the depth of a proper studio album without the pressure of providing pop music – faraway from Hurry Up, We’re Dreaming and Junk." In that regard, Gonzalez achieves what he sought after, but his execution in getting there is questionable. His quest can be applauded to a degree – but one has to seriously consider how much more he can successfully squeeze from a time and an era before becoming lost entirely.