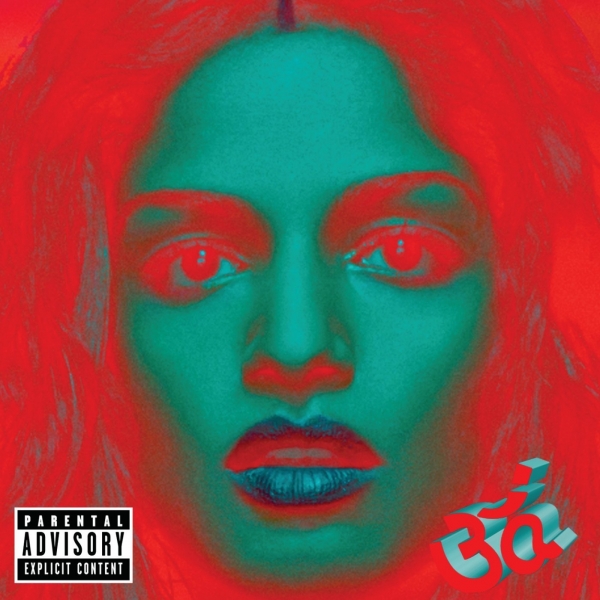 After openly announcing one’s retirement only to retract the decision two years later via a critically divisive album met with comparatively muted praise (still considered by many to be a slight misfire and the obvious weak candidate in a pretty short legacy), it’s safe to assume that the post-comeback comeback has to be an absolute killer. It is with that burden of pressure that M.I.A. releases her fourth full length effort, Matangi.

After well documented clashes, release date setbacks, public maulings and questions of authenticity, the only way to silence the doubters is to produce a musical riposte that comes back with a “power power” that’s nothing short of omnipotent. Fittingly enough, it is with a Hindu goddess of music, representing cultural transgression and outcast status, that M.I.A found the namesake of her comeback record. Never have the stars been more clearly aligned.

In case you’d forgotten who M.I.A was, or more likely are floating in a vacuum of space, then opener “Karmageddon” serves as a handy re-introduction by way of lyrics like “My words are my armour/You’re about to meet your karma”. If that’s true, we’ve obviously been sowing serious goodness as the title track which follows is a riotous return to form, pulsating with bass and lashings of attitude. “Only 1 U” tirelessly fires off, and paves the way for the pounding middle section of the record. Sitar samples and a truly evil sounding hook make “Warriors” a standout moment, while “Come Walk With Me”‘s electro freak-out nestles in with the hyper 90′s garage beat of “Attention”. “Sexodus” is majestic and one of the most listener friendly tracks in a collection of such irregular shapes, while “Bad Girls” deserves a lifetime of honourable mentions as the bona fide, solid gold, genius star of the show – and arguably her greatest song ever. But “arguably” it has to remain, as each track on here is bursting to win that accolade, not least Maya’s killer challenge to the favoured T-Shirt acronym of a hashtag toting generation, “YALA” (“you always live again”) or the club-friendly stomp of “Bring the Noize”, neatly squared off mission statement and certified classic in one breath.

The energy changes for “Lights”, a tripping, rhythm led admission to the creative freedom M.I.A has fought for and a quiet nod that she’s heading back to her earlier, more challenging roots, no longer concerned with “Paper Planes” and beer sloshed student singalong clubnight fodder, but exactly where she wants to be right now- which appears to be back on the left side of the tracks and on the wrong side of, well, quite a few people actually. “People don’t get it so I keep them in line” she spits at the Lynn Hirschbergs of the world. “Know it Ain’t Right”‘ is intimate, soft respite as a closing track, and after the exhausting throb of what has been, a welcome one, as well as wholly unexpected, which of course makes it all the more perfect.

Having claimed Matangi is ”based in acceptance”, we’re not sure what version of acceptance she adopts as the resident agitator of modern music where she rejects most of everything. In a world where she causes absolute chaos and a breakdown of the very fabric of society- or maybe just middle America- simply by sticking her middle finger up at the super bowl, M.I.A is an unspeakably dangerous social menace without even trying. As obscene as that may be, in relative terms she truly is because she dares to say something, anything, in a culture of otherwise mindless apathy and Live And Let Live-rs where most people don’t get the chance, endless purchase porn and vacuous hip hop capitalising on shallow aspirations. The controversy M.I.A courts occurs because she mildly rattles the system, not blows it apart, but that she says anything at all is enough. Challenge, create and agitate is the agenda she’s, as ever, pushing and it’s as exhilarating as it always was.

The processed beats, squawking samples, tribal drums, sub bass and insane pace that characterise this album reflect an artist who, in the face of vicious label disputes, has finally got her own way. It certainly doesn’t sound like it came from a major label, but that’s all testament to the gutsy convictions of Mathangi Arulpragasam who, in Matangi, triumphs over the multiple adversities and adversaries counting against her. Still sounding like nothing else, M.I.A is very much her own brand and unchallenged in her dominance simply because there’s nobody else in her category. Her child-like rhymes may seem like she’s only toying with playground politics but she knows exactly where her strengths are; Matangi is a tribute to those talents and it’s an unmitigated thrill. Dissident, deviant, “mili-tent”; Cookie cutter pop star she is not, but a true great she absolutely is. We’re not even sure what the rules are but it always sounds like she’s not playing by them.

M.I.A already has a lot of friends in high places, from the couture to the extradited, the adored to the reviled. Whether Matangi will win her any new fans is an almost unnecessary question mark – you feel the album is not especially made to please anybody in particular- but it will at the same time spit in the face of detractors while igniting the passions of her regrouped admirers. Count us in the latter half