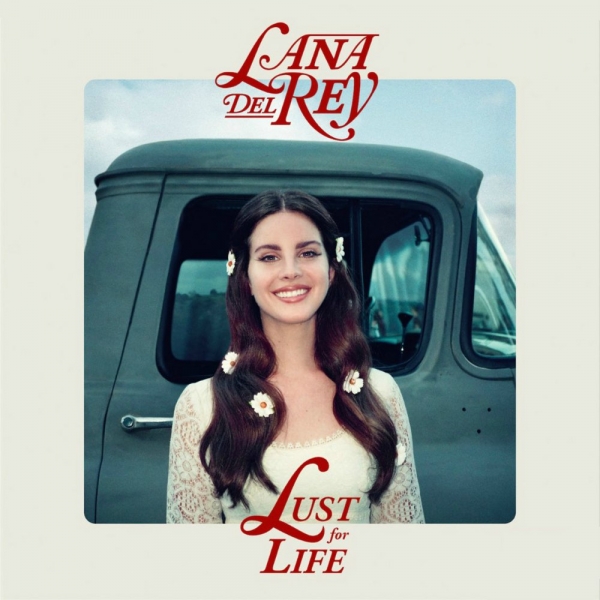 Lana Del Rey just wants a beach to herself so she can enjoy her peaches in peace.

On her new record, Lust For Life, the queen of elegant nonchalance, shows she's in no hurry for the summer to end while she leisurely enjoys the fruits of her creative labor. Del Rey’s music is a casual invitation for her listeners to share in her carefree sense of abandon and join in her wounded quest for love, adventure and after-parties.

Lana has an uncanny ability to make the mundane sound magical, just so long as you’re young enough to fully enjoy it and wealthy enough to be able to afford the ride. So whether you’re getting dressed up in your finery just to make a coffee run, fashioning your crown of flowers for a music festival, or escaping your demons with blood red sangrias on black sand beaches, Lana is there singing in your ear like a cool ocean breeze with just a hint of a storm approaching.

This time around she’s brought along a bevy of high-profile friends (The Weeknd, A$AP Rocky, Stevie Nicks, and Sean Lennon) to keep the party lit and lasting until dawn. Because we "gotta dance ‘til we die," after all.

The singles drawn from Lust For Life are all massive, top-down jams tailor made for cruising the Pacific Coast Highway with the wind in your hair. Lead-off track “Love” illuminates the serene conceit of knowing that you are young and beautiful, or beautiful simply because you are young. Either way, you have your whole life ahead of you and are fortunate to have entrusted your heart to someone who shares your same blissfully optimistic worldview. Life doesn’t get much better than that, especially when that is all you are looking to get out of life at that moment. “Look at you kids, you know you're the coolest / The world is yours and you can't refuse it / Seen so much, you could get the blues, but / That don't mean that you should abuse it.”

The Weeknd-assisted title track immediately ascends to the upper echelon of Del Ray’s growing catalog of hits, with the pair of stunning superstars looking down on Los Angeles (and the music world in general) from their lofty perch on the haunted H of the Hollywood sign. The song is packed with infectious hooks and lusty sing-alongs, as well as a clever throwback to the innocent allure of the doo-wop era and the chart-topping girl-group classic, “My Boyfriend’s Back.” The track fluidly blends the sensual with the inspirational, going from the liberating assertion of being “masters of our own fate” and “captains of our own souls” to taking off all our clothes in a hot, breathless second. Seize the moment; just be sure that you’ve got the proper lighting before you share that intimate part of yourself with your followers. That’s the only way to stay gold in the social media age, Ponyboy.

The rest of the record is a stylish mix of modern sonic flourishes (featuring production work by Rick Nowels, Kieron Menzies, Dean Reid, and Del Rey herself, credited as executive producer along with Nowels) and nostalgic references from music’s near and distant past. “God Bless America – And All the Beautiful Women In It” contains blasts from a gun reminiscent of M.I.A.’s “Paper Planes,” while also making a not-so-subtle statement about the country’s rampant gun problem at the same time. While “When the World Was At War We Kept Dancing” is a cheeky, contemporary reworking of the Summer of Love hippie anthem, “San Francisco (Be Sure to Wear Flowers In Your Hair), just substituting pearls, horses, curls, and corsets for current traveling essentials when you grow tired of the U.S. and decide to cross the pond.

Occasionally the album becomes too self-referential and vacantly self-aware for its own good. On the vapid “Coachella – Woodstock In My Mind,” you get the impression that Del Rey is just strolling around the V.I.P. area while watching a Father John Misty performance, trying to turn what she is seeing into something far more profound than what’s on offer in the velvet-rope luxury in the midst of the California desert. And on the Sean Lennon collaboration “Tomorrow Never Came,” not only does the song title and melody vainly mimic The Beatles, but Lana also sings, “'Isn’t life crazy?' I said, now that I’m singing with Sean.” We get it. It’s cool that you’re working with one of your idols and that he’s John and Yoko’s kid and all. But try and come up with something more profound to say about it other than a sick brag about the famous numbers you have programmed into your phone.

Elsewhere the familiar echoes are far more genuine, and the collaborations much more natural – with Nicks on “Beautiful People Beautiful Problems” (which would serve as an appropriate title of a future autobiography from either Lana or Stevie), and on the laid-back West Coast vibes of “Summer Bummer” and “Groupie Love,” which both feature rap verses from A$AP Rocky that sound right at home over the tracks’ fresh trap beats. The isolated, oceanside despair of both “13 Beaches” and “Cherry” are triumphs of resiliency for those moments when love and friendship abandon you. The songs play out like anguished couplets, a pair of haunted testaments to the inner strength needed to lift the clouds that plague your thoughts with sinister shadows and painful memories.

Lust For Life is filled with the leisurely charms of someone who is in no hurry to grow old, as well as the tenacity of an artist who stubbornly refuses to forget about any of the people who have scarred her in the past. Lana Del Rey appears to be striking a delicate balance between yearning to be left alone on her private black beach, with a self-serving desire to have the eyes and ears of the world focused on her for as long as she can. But throughout this accomplished, assured new record, Lana manages to repeatedly freeze time and capture those fleeting cinematic moments that make us who we are, while reminding us of who we could be.