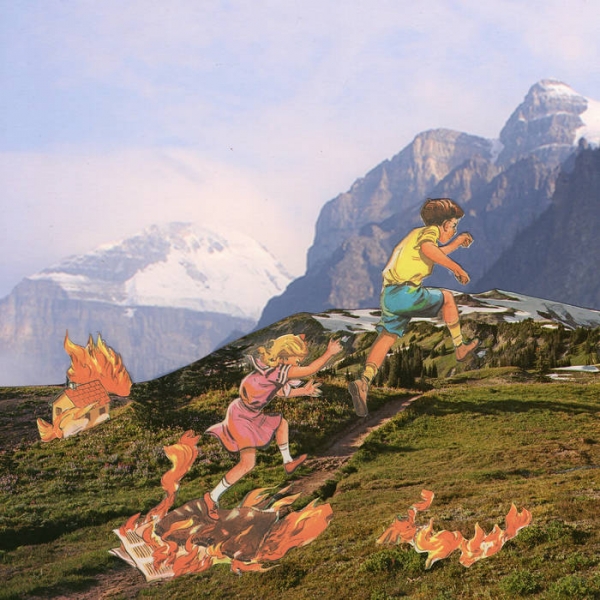 Carrying the torch for new beginnings, Lakes are confident in their own do-over.

An ode to learning from the past, the Watford sextet are channeling the high water mark of emo’s third wave as they return with new album Start Again. Filled with math-pop time signatures and midwestern melodies, the group teeter on the cusp of spilling into pop punk territory as they float dark themes with a joyous outlook.

Setting the mood from the outset, opener “Blind” drifts in with a lamenting cry. Peppered delicately with light plucks and sparkling glockenspiel notes, there’s a deceptive gentleness to vocalist Roberto Cappellina’s outpourings. With the pondering line “I guess you’ll never know / Unless I say what’s on my mind”, it’s clear this is a release born from openness and communication — a theme the album consistently returns to.

As they pick up pace with second track “No Excuses”, a tune revolving around a surging melody and an off-kilter rhythm, the group aren’t shy about their influences. Recalling early Tigers Jaw in the sextet’s dual vocal delivery, and the vibrant fingerpicking movement of TTNG, it’s no surprise they have found a home within Oxford-born label Big Scary Monsters. Yet, while their source of inspiration is recognisable, the band are confidently carving their own path as the track spins off in carnivalesque circles and allows a dreamy current to fill the gaps in their own complexities.

Tackling themes of mental health, anxiety and subsequent healing lyrically, the album provides much-needed moments of reflection in tracks “Windermere” and “Taupo”. Both short instrumental pieces, the names nod to their earlier work as they take monikers from Lakes on opposing sides of the world. A running theme, that for the most-part this album has now departed from, these songs feel like moments of cleansing as they combine rippling synths with a shuffling percussion, all highlighting the band’s dynamic nature.

Writing collaboratively for the first time, the coalescence of perspectives creates a hypnotically intimate full-length that feels deeply personal. Flitting between confessional storytelling such as in centrepiece "Peace", or the jagged, intensely energetic "Matches" where vocals strain and melodies soar, the group grow from their collective past to ultimately reroute a well-worn genre.

All resounding with a chaotic composure that lends Start Again its mesmerising edge, they coast through tales of past mistakes with a shining hopefulness at its core.

As the record rounds out with final track “Animals”, the band rise up together in an atmospheric wash of overlapping layers. For Lakes, starting again isn’t a sign of defeat, it’s a learning curve. As the group’s honesty and openness shine, they stand united, a confident gaze firmly fixed on a hopeful horizon.