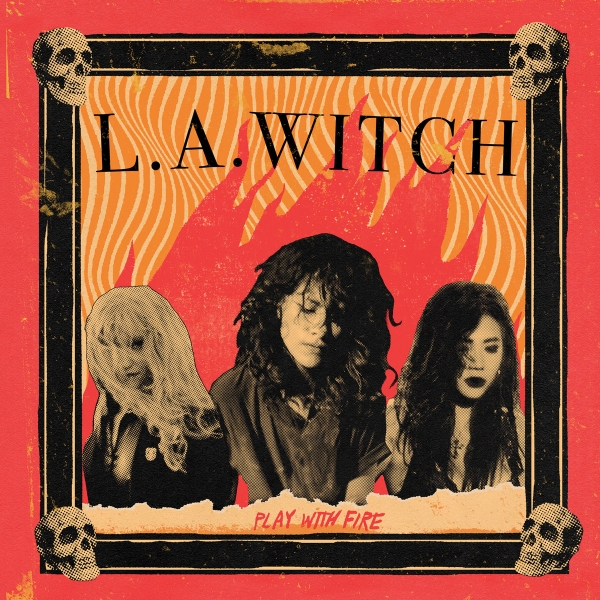 With the same elusive draw as a Quentin Tarantino film, L.A. Witch manages to encompass a whole heap of meaning without giving too much away.

Since appearing a few years back, they’ve been a resoundingly gothic edge to a world that is dark for all the wrong reasons, living in their bubble of noir-chic and Hollywood vampires. With their self-titled debut, they introduced us to their unique brand of sleaze-to-appeaze rock ’n’ roll, and on their second outing, Play With Fire, the trio embarks on a journey down the long, twilight highway, feeling the breeze whipping as worries are carried away in its wake.

Nothing has really changed, but it’s the rattling pace which has kicked up a bit, with the same propulsion as a big-bang firing back motorcycle engine. Even dipping their toes further into the psyche world, letting the tracks ripple, seeing where the ever-lasting circles take ‘em, and with it, they’re bringing the brooding thunder of a band untamed and unruled.

Effortlessly cool, the gothic trio make their intentions clearer. Where before they wanted to “Kill My Baby Tonight”, now it’s more focused. “Are your motives pure and free? / Has the world fulfilled your needs?” Vocalist Sadie Sanchez questions on single “Gen Z”, and the hot topic of being in a world that puts those questions front and centre isn’t lost. Nor is the sexual freedom of the modern age where “Sexorexia” laments the frustration of a lustful life when it all comes to an end [clatters] around this rabble-rousing number. Sex, drugs [motorcycles] and rock ’n’ roll - it’s all here on Play With Fire.

L.A. Witch has managed to capture lightning in a bottle with enough space for you to stand back and observe without getting singed. Those haunted hills filled with witchcraft and lore - the Hollywood undead - are still marching to the sound of their own beating drum.