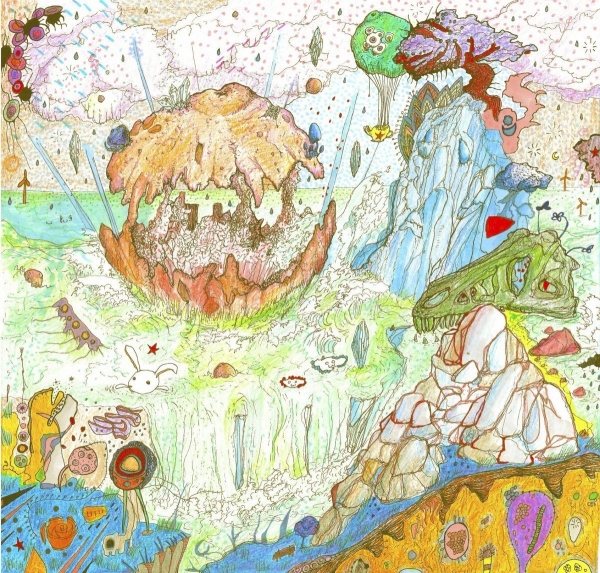 Kiran Leonard, just twenty years of age and on his second album and with a follow up already mentally mapped out, is a multi-instrumentalist who, four years on from his impressive debut Bowler Hat Soup, has increased his already expansive approach to making music. Grapefruit is full of weird and wonderful things.

The son of a folk singer and younger brother of a post rock/jazz fan, Leonard is proving to be a musical collector. He's known to be explicit about his influences which can be heard throughout, used to get to an end point rather than being derivative.

Anything is possible here. The first glimpse into the album was the 16 minute freeform headfuck that is “Pink Fruit”, which is, in essence, three songs edited together. It takes in the same kind of passionate yearning of Jeff Buckley at his most transcendent, a blast of Radiohead when they were a rock band, a middle section of two minutes of AM radio static, a hushed but audible discussion in the studio, the fuzzy hum of broken electronics, a violin being tuned, and lyrical metaphors about body issues in the form of a squid in a lover’s hollowed out abdomen. It's a magnificent meander operating in the outskirts of rock - The 1975 can’t do this.

Although Grapefruit is born out of a love of chaos and discord, there are also moments of tender beauty, the kind of florid expressionism you’d expect from a Rufus Wainwright or Ed Harcourt record. The opening track “Secret Police” takes in the classic song writing of Randy Newman, it sounds romantic, but lyrics like “And in the home there sits the water/ I provide for my wife and daughter/ So who am I to run through mute terrain / As they drag me out, throw soil on my name” are world weary and evocative, the wave of violin, piano, thrillingly slow builds into nothing at all.

The trick is repeated later on the effortlessly pretty “Caiaphas In Fetters”. Stripping away the intricacies of other tracks here lays his song craft explicitly bare. Like the finest Brian Wilson-Van Dyke Parks collaboration, there's beauty to it, but with an oblique lyrical twist (“There was a violence in how you spoke / No underlying empathy to protect / You do not possess her… it’s not a joke”). The exquisite closing string section worthy of a Pet Sounds comparison is curve balled by a random discussion in the studio about the edutainment game Reader Rabbit Two.

“Öndör Gongor”, named after one of the world’s tallest men, is a pitch bent discordant sea shanty song evoking images of tiny stranded boats and futile attempts to make it back to sea ("A clatter of shins hit the dock / A heaven in the sharks' abode / While Ethel the hungry orb rots in the docks below"). This kind of vivid story telling is on par with the likes of Nick Cave, and Leonard's ability to transport the listener into the world in which he writes is a skill which eludes many.

“Exeter Services”, a punk rock thrasher which operates as a love letter to his documented passion for The Mars Volta and Shellac aside, Grapefruit is a complex listen - we have musical mastery on show here. The closing track “Fireplace” is a ten minute sprawl with little structure, the parping horns, de-constructed drum patterns, cut up vocal samples, out of tune pianos, guitar feedback. Instruments aren’t being played, sounds are wrenched from them, disrespected, bashed the hell out of, the crescendos of holocaust sectionesque noise is high level art, we’re talking Miles Davis, Zappa kind of levels.

In an era of earnest ‘authentic’ singer songwriters, we need artists like Leonard more than ever, his ability to make an album of this breath-taking scope barely out of his teenage years makes him one hell of a prospect - just think of the years of music we’ve got to come! With Grapefruit he’s has shown an ability to take the fabric of rock n roll to other dimensions, to surprise, to confound. At times this means it’s pretty heavy going but it’s never boring. It’s wildly ambitious, challenging and wonderful.