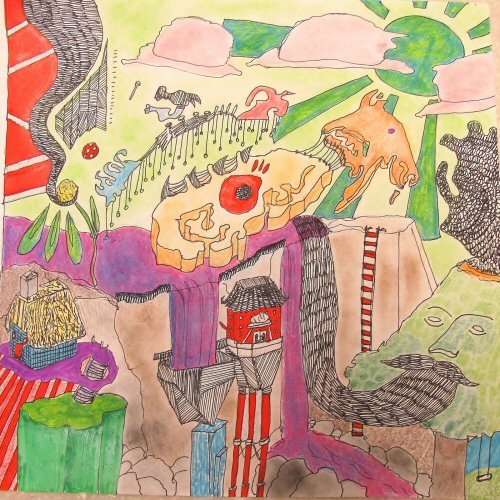 Kiran Leonard, a young multi-instrumentalist brimming with talent and ambition who sounds like Thom Yorke in the middle of a West End theatre run, uses 24 instruments on his debut album – including a radiator. He positively boasts of his wide-eyed quirkiness. In the past, with projects such as ‘The End Times’, the Manchester musician has sung about “synchronised outer space attacks and a plethora of natural disasters” in a lengthy track that neared the half-hour mark. On Bowler Hat Soup, with its busy cover art reflecting its richness as an album, the lyrical content ranges from alcohol consumption to love and war.

Straight from the off, you’re plunged into the deep end with the lively and reckless “Dear Lincoln”, the peculiar little lead single being a perfect vehicle for Leonard’s immediately arresting, unique voice. Toning things down from such an erratic opener, he displays a much more considered approach by linking to his childhood in “Brunswick Street”, a song about a road in Melbourne filled with record shops and vintage stores that Leonard used to visit when he was 10, featuring a welcome, soothing violin provided by friend ‘Amanda’.

“Whisky Bath” is much like alt-J’s interludes on their debut album – in all honesty, a waste of time. Fortunately, it’s also easily forgotten as you’re introduced to the magic of “Sea of Eyes”. Expressing a love for nature through vocal layering at its most effective, Kiran questions “I love your eyes, do they love me?” on this brief heartstring-plucker that’ll have you wishing it was longer.

Yet even the longest song here – the 7’07” of “Drysdale”’ – can’t really be compared to his previous, aforementioned epic ‘The Big Fish’. Despite starting off slowly, its flirtatious banjo plucking merges into a frenzy of violin, melodica and euphonium (played by friend ‘Seth’) before ending on the rattle of a grill.

Just from the instruments listed in that one song, you may gather there’s certainly potential here for sounds to clash rather horrifically. And whilst Bowler Hat Soup does come across as a little mashed-up at times, that’s its charm. Try to take your mind away from the winning garage-rock riff in the daunting ‘There’s No Future In Us’, and you might just be able to pick out the charmingly nonchalant vocals, much akin to Kristian Bell of devilish upstarts The Wytches. Elsewhere, “Geraldo’s Farm” emerges with fierce synths combined with Kiran’s cries in a truly majestic chorus, highlighting the sheer breadth of his musical ability.

The passion and power in Leonard’s vocals is tangible as he croons on the subject of “lost generations” and “futureless nightmares” in the closing “A Purpose”, the sombre reed organ complimenting his voice to a tee to provide an exceptional finish to a touching record.