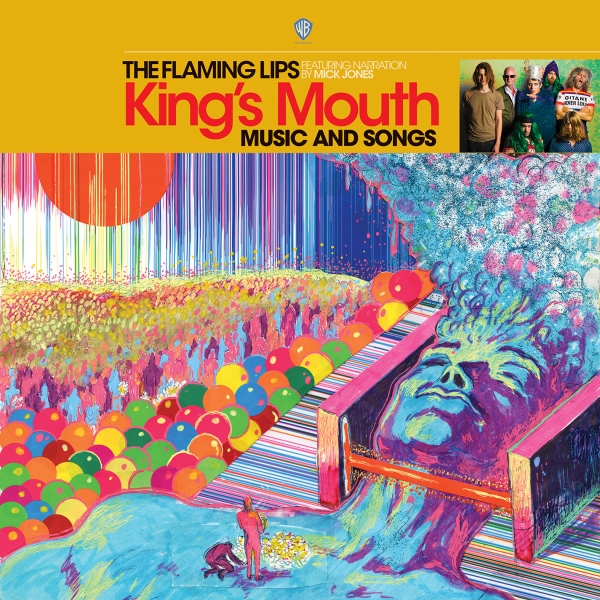 The Oklahoma-based neo-psychedelic septet resurrect the concept-driven strain of their early to mid-noughties output, returning to off-kilter prog pomp with playful, if occasionally static, results.

In a turbulent career which has spanned fuzzy post-punk and ostentatious space rock antics, The Flaming Lips have proved adept in the art of flouting expectation with irregular frequency; recent collaborative turns, with the likes of Miley Cyrus having served to broaden the band’s usual niche profile. This fifteenth LP, originally released for Record Store Day, as such, finds Wayne Coyne et al navigating Yoshimi and At War With The Mystics-era territory.

Accompanying its namesake touring art-installation, King’s Mouth is a whimsical affair; a quasi-psychonautical trip which revels in characteristic bohemian bravado. Juvenile innocence tempers its excess; a naïve simplicity delivered throughout, competing with, rather than complimenting, the album’s layered instrumental intricacies. Mick Jones, of The Clash, is placed on narrative duties, chronicling a notably prosaic storyline with dry monotone disaffection; a sense of distance which shouldn’t theoretically work but figures as a therapeutic force amidst its cosmic decadence.

Elements of The Terror, with its modulating electronic soundscapes, are drawn upon, alien sonic sprawl that distracts from less tight-paced moments, which are not entirely infrequent. The flaring synth ambience of “Electric Fire” sees the veteran outfit revive their swirling, often disorienting, brand of gravity-defying experimentalism, while “All For The Life Of The City” functions as a low-key acoustic-centric comedown, a blithely inoffensive track that drops a dose of conventional stupor. Reverb-drenched guitars resonate throughout the Pink Floyd-esque “Dipped In Steel”, a slice of stoner rock that neatly follows the imposing heights of “Funeral Parade”, an exercise in kooky chant-rendered operatics.

Bleeding between the nebulous and formulaic, King's Mouth simultaneously presents the band at their most obscure and lucid; opposing absolutes that are wrought with the band’s ineffable style. This incongruity does not, however, dent the album’s stronger moments, which can be considered the Lips’ finest material in several years.