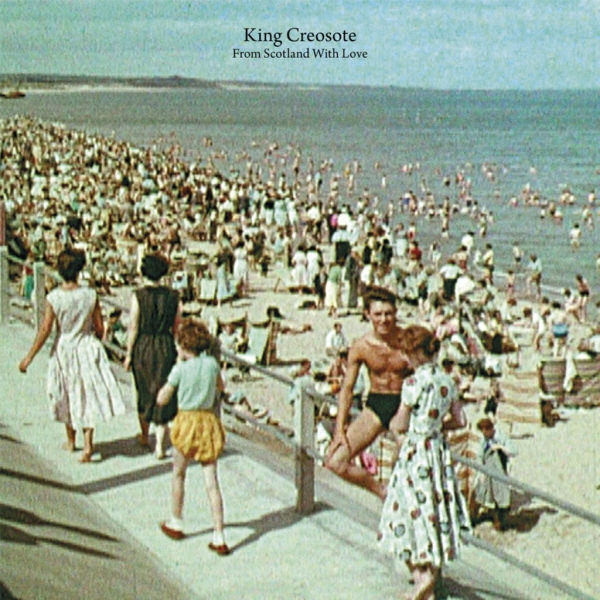 As I sit in my office in Covent Garden, artificial air being pumped through a giant box just above my head, artificial light being created by the tubes on the ceiling, looking through my only window, which gives me a view of the interior of another part of the building, I do often find myself daydreaming, yearning, wishing desperately, of the outside world, and in particularly, the Scottish Highlands.

So it’s unsurprising, when I read the blurb for King Creosote’s latest work, From Scotland with Love, that I learn it was recorded as a soundtrack to the film of the same name, a film with no dialogue or interviews, just archive-complied footage of places and people from the Bonnie land.

On reflection then, perhaps reviewing this King Creosote album is somewhat of a masochist move, as opening track “Something To Believe” immediately transports the listener to the land of heather, thistles, and large bodies of water.

The Pete Harvey-arranged strings through throughout From Scotland With Love are one of its defining features, and the backbone of the album. The strings create bring a host of settings to life, from a smooth-running river in “Leaf Piece’ to wistful regret in delicate ballad “Miserable Strangers”. Paired with the sometimes jangly, sometimes picked acoustic guitar, it’s a simple, stripped back sound that works perfectly and refreshing to see it take centre stage.

“For One Night Only” emerges joyously halfway through the album as a Friday afternoon anthem, in the vein of Arctic Monkeys “The View From The Afternoon” to “Pocketful Of Money” by Jens Lekman. It’s got all the hallmarks lyrically, with references to spending the housekeeping money with reckless abandon, and the celebrated payday feeling.

The following track, “Bluebell, Cockleshell, 123” is a vignette of elsewhere on perhaps the same Friday afternoon. A school-yard skipping game (complete with a choir of children and hand claps), it expands further the Scotland-scape created throughout the album.

There are further Scottish idioms scattered throughout the album, including ‘haud yer wheesht’ - a slightly disturbing flashback for anyone who’s been on the no-nonsense end of a Scottish grannie.

“Largs” marks an interesting departure musically, with a jaunty style that’s more Klezmer than highland fling, but with more than a definite not to Scotland lyrically – “The water here doesn’t get any warmer…”.

This is KC’s first album since his much-acclaimed collaboration with Jon Hopkins, and what a wonderfully personal way to return. This will no doubt work beautifully alongside the film (Visit Scotland take note), as lyrically, it’s both accessible and niche, a collection of stories and snapshots to accompany and augment the footage. But it also works as stand-alone propaganda for our friends north of the border, and album that feeds the imagination and makes you long for mountains, open space, and something a little more natural.