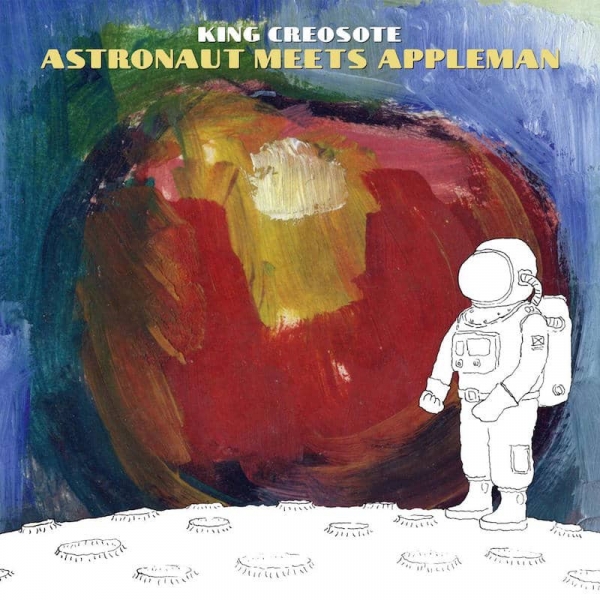 Domino Records continue to give Kenny Anderson the artistic freedom to deliver such abstract, unusually constructed albums as this. Under the guise of King Creosote, he and his pals’ have recorded all around the British Isles giving this ‘cosmic’ record a fleshy Celtic flourish.

Having talked to Kenny two years ago about the score of the film, and consequent album From Scotland With Love, this album inspired a few memories of that time with him. It shows a consistent contemplation on similar subjects and styles which has allowed him to produce albums at such an alarming rate.  Foremost was his relationship with technology, a continual concern weighed on Astronaut Meets Appleman. Second, showing it’s an issue close to his heart, were his thoughts on his daughters' places in the digital age. His eldest "is very much the iPad, iPhone, TV, video-game [generation]", while his youngest features on ‘Peter Rabbit Tea’ on this record as the voice of nascent innocence, repeating the phrase and creating the strangest nursery-rhyme ever.

Although his albums are not a one man showcase - Diamond Mine, the Mercury-nominated collection, being the collaboration with Jon Hopkins and this album and From Scotland With Love which are comprised of an orchestral ensemble, including multiple backing and solo sections – it's King Creosote’s ability to quickly sketch real, earthy characters which is his biggest draw. Even the title conjures an ‘appleman’ figure who could be anyone from a purveyor of pommes to a millennial iPod-toting hipster. It’s probably not the Urban Dictionary definition describing “a male who likes to stick apples up his anus”, however the twisted humour would no doubt appeal to the Scotsman. Such crudités are not so apparent on this record as it's much lighter and looks to spurn the dark, cynical characters he created on his last.

Beautiful lyrics such as “destructive interference across the millpond” are the kind that these songs are built around. The voice of his daughter repeating “Peter Rabbit Tea” is simple, but oddly the words start to lose meaning as the same sound is stretched and manipulated. Such abstraction is also a big feature of the piece, where one might argue ‘that’s not a song’ and ‘that’s not art, my child could do that’. The artwork conflates an impressionistic apple with a clinical pen-and-ink drawing of an astronaut too.

It’s a classic KC album. His Scottish brogue, the bagpipes, accordion and harp all reappear for his now expected impish magic. From seven-minute busking-style bluegrass openers to his daughter’s debut vocal, the experimentation won’t be for everyone and does lack the coherence found in the From Scotland project, but after dozens of albums, King Creosote is still finding ways to push himself and is totally justified purely for the creativity of the finished work.