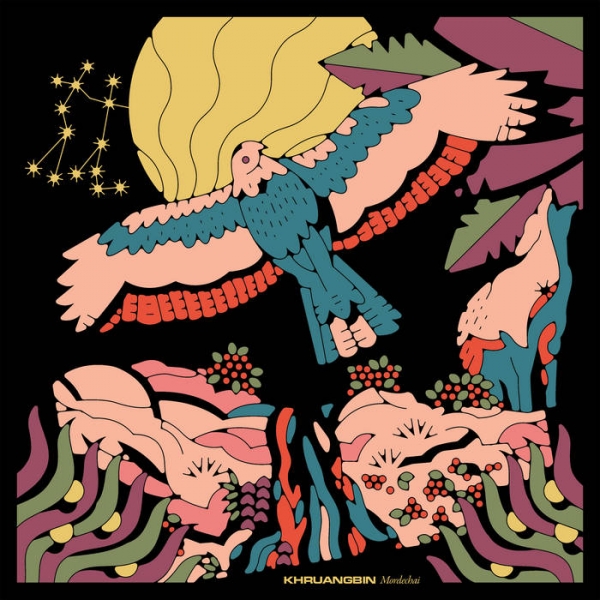 Times in which you might be seeking out comfort and calm in music more than ever. Enter Khruangbin, the Texan trio, whose airy instrumentals float around you like swirls of soothing incense. Their first album, 2015’s The Universe Smiles Upon You, was rooted in their discovery of ’60s-‘70s Thai psychedelia, and on their 2018 follow-up, Con Todo El Mundo ("with all the world") in bassist Laura Lee’s native Mexican – they added dashes of Iranian and Mediterranean funk to their sound, and even threw in some disco. It was a fitting title for the album, as the group effortlessly embraced disparate genres from different regions and eras and meshed them all into a perfect union.

With Mordechai, the trio continue on their globetrotting pursuits, but it’s something else in dreamy, suave opening track “First Class” that immediately stands out: lyrics. Every tune but one on Mordechai has them. Lead single “Time (You and I)” is one long bouncing disco break, Donald Johnson’s drums skipping and Mark Speer’s guitar wah-wah-ing, as Lee invites: “we can play like children play”. Following track “Connassais de Face”, a crisp, swaying number, boasting one of the best roaming basslines of the album, sees two friends shooting the breeze, one asking “shouldn’t we enjoy life?” Moments later “Pelota”, a balmy fiesta of a track, makes its timely entrance, with Speer’s trademark nimble guitar-line at its centre, and complete with Flamenco handclaps. It’s sung in Spanish, with a chorus that translates to “Right now I can be the ball” – there’s no profound philosophical message to unpack here, it just is what is: mindless, freeing fun.

The words, all from Lee’s journal which she began writing after a reinvigorating hike she was taken on by a friend named Mordechai, adds a whole new dimension to Khruangbin’s world. Their instrumentals alone already evoke plenty of feeling, and now with lyrics thrown into the mix, those feelings are reinforced, be they tender, playful or reflective. The group sit deeper than ever in their grooves on their third outing, and the moments of tranquillity are even more zen. Mordechai offers a rich, meditative escape from the world, something more welcomed than ever in the current climate.