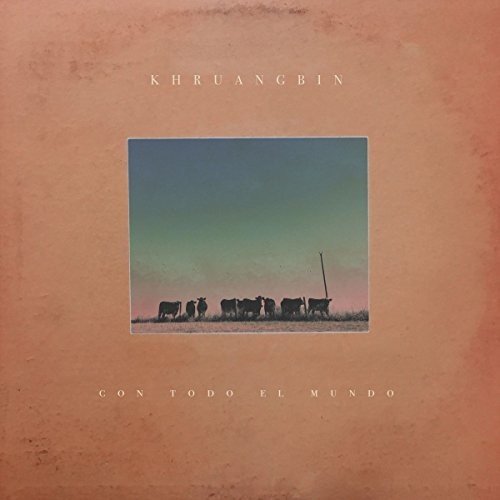 As an album made up predominantly of instrumentals, it may seem tenuous to associate Khruangbin’s second record with an overtly political or cultural message. Yet the Spanish title speaks for itself, translating to “With All the World”. This is a record not only rich in beautiful psychedelic colour, by extension, it celebrates international culture and unity.

With their 2015 debut The Universe Smiles Upon You taking heavy inspiration from Thai funk from the 60s and 70s, the Texan trio have broadened their pallet to include sounds of the Middle East and Mediterranean funk and soul. With multiple track titles in Spanish, nods are also made to Latin America, particularly bassist Laura Lee’s Mexican heritage. In times of division in some parts of the US and beyond, Con Todo El Mundo is a refreshing project. Undoubtedly, this record is a mile away from a seething statement; it is airy and cinematic, but a consideration of its context only enhances the grooves.

Leading single “Maria También” tells a tale of female liberation in Iran prior to the 1979 revolution, its video features a series of shots of Iranian singers, songwriters and performers since exiled from their country. Sonically, the song takes inspiration from Iranian and Middle-Eastern funk, with guitarist Mark Speer able to take centre stage and show off mesmerising technical prowess.

“Como Te Quiero” is a languid, floating number in which echoes of Spanish can just about be made out. The guitar work could be the soundtrack to staring into a clear sky. “Lady and Man” finishes with more attitude, tinged with humour, and a chant that will resonate with many: ‘I went to college, I could have been a doctor/ I could have been a lawyer / Oh come on, not that again”. Elsewhere, “Evan Finds a Room” is probably the moment at which the record is most conducive to a boogie, playing out like an infectious blend of understated disco and Asian funk (honestly, it works).

Khruangbin tapped into the depths of their global influences on long car journeys through Texan landscapes on their way to rehearsals. Con Todo el Mundo feels like a record to be enjoyed in transit, towards somewhere sunny, optimistic, exciting. The band soon embark on winter and spring tours, and as a live outfit, they will transport you to warmer times.