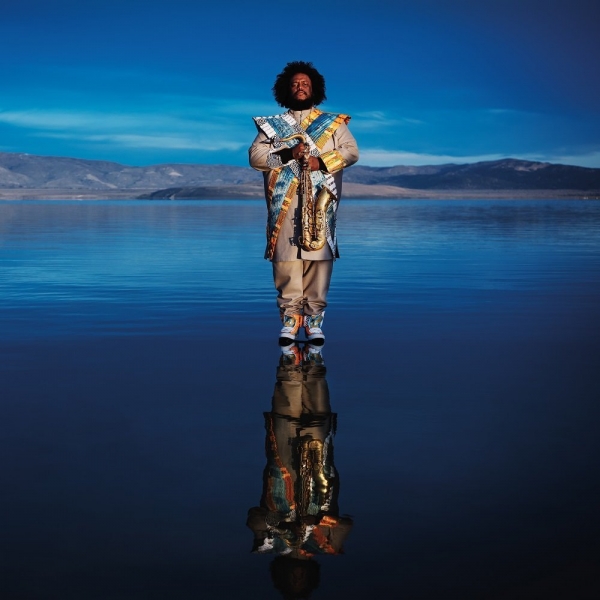 The early odds for Kamasi Washington gaining a foothold in the upper echelons of the music biz were most certainly not in his favour.

Not only is the Los Angeles-based saxophonist, composer and arranger deeply rooted in jazz, a colossal American art form long caught in a seemingly irreversible process of atrophying into a dusty museum for dry academic study. Washington also added to the challenge by reviving a spiritually enlightened, cosmically inclined marginal offshoot of his chosen genre, which was widely derided for not being ‘proper jazz’ even when its original practitioners were at their peak in the 1970s.

Turns out that Washington’s antennas were astutely tuned. By referencing the repertoires of vintage cult heroes who emphasised heady communal grooves over flashy displays of individual technical excellence, Washington provides a vivid and vibrant reminder of jazz’s origins as a dance music. The core band on Heaven & Earth – a double album, with the Earth half inspired by the chaotic reality we live in, whilst Heaven hones in on the dreamier vibes of Washington’s inner world - features two drummers but the purpose of this move is most definitely not to double the number of drum solos. This is a record that throbs and vibrates with an infectious pulse even when the instrumentalists aim for the outer reaches of lightning-speed look-at-me flurries of virtuoso showing-off.

Washington’s aptly titled 2015 solo debut The Epic was a three-hour, triple-album colossus. Having finally achieved a breakthrough after years of toiling in semi-obscurity on the LA jazz scene alongside such future neo-jazz luminaries as Thundercat (who guests here) and, considerably more glamorously, serving as a string arranger on Kendrick Lamar’s seminal To Pimp a Butterfly, Washington isn’t about to risk his hard-won acclaim with too dramatic a rethink on this follow-up. Keeping with its predecessor, Heaven and Earth spends a significant portion of its sprawling two and a half hour running time knee-deep in gratitude to such pioneering cult heroes as Pharoah Sanders and Alice Coltrane. Whilst other recent revivers of jazz opt for the modernising touches of post-punk energy (Polar Bear), globe-trotting mash-ups (Melt Yourself Down) and electronic skittering (the brilliant Comet Is Coming), the 37-year old Washington retains a resolutely retro aesthetic.

However, Washington’s uncompromisingly maximalist vision – at its most sumptuous, literally dozens of musicians and vocalists can be heard at work simultaneously - ensures that Heaven & Earth never resorts to lazy pastiche. For example, familiar points of reference ricochet around during the ten minutes of the simply astounding opening cover of classic kung-fu film theme “Fists of Fury”. Yet it’s very unlikely anyone else has ever dared to attempt (never mind having pulled off) such a lavishly layered – massed choirs and strings feature prominently – cocktail of razor-sharp '70s Blaxploitation street funk, Thelonious Monk-esque piano abstractions, John Coltrane-indebted sax attack and the opulently orchestrated wide-screen soul epics of classic Isaac Hayes, Stevie Wonder or Curtis Mayfield. The righteous, Black Lives Matter-inspired anger of the jaw-dropping outcome brings to mind a totally unique, hashtag-era update of the funky, socially conscious ‘message jazz’ explored on comps such as Soul Jazz’s New Thing!.

Elsewhere, Heaven & Earth sticks closer to the theme/solo template that jazz is built on. This can seem faintly disappointing at first, especially as the ethos of sharing the spotlight evenly with fellow musicians familiar from Washington’s live shows leads to extended break-outs of noodling that can threaten to overpower the gorgeous melodies of, say, “Can You Hear Him”. Give it time to reveal its initially overwhelming array of riches, and the winningly diverse – “Testify” presents a tenderly funky heat-hazed soul ballad, whilst “Street Fighter Mas” unveils a chorally enriched update of the tough analogue keyboard jazz/funk fusion familiar from Herbie Hancock’s Headhunters - giant of an album soon clicks into completely compelling focus.

Promisingly, there are further signs that the form-busting experimentation of the big band masterpiece “Truth” from last year’s EP Harmony of Difference is an ongoing project. The sublime “Space Traveller’s Lullaby” floats by weightlessly (and very, very beautifully) at its own unhurried pace, resembling an unexpectedly psychedelic theme to a vintage Disney animation penned by the Sun Ra Arkestra at their most melodic. The wide-eyed wonder of the hymnal closer “Will You Sing” is even more impressive with its echoes of the carefully calibrated balance between fat, juicy beats and swooning melodicism of David Axelrod’s classic productions. Arresting moments like this, audibly uninterested in the genre strictures, suggest Washington is only just getting warmed up in his quest to reboot cosmic jazz.