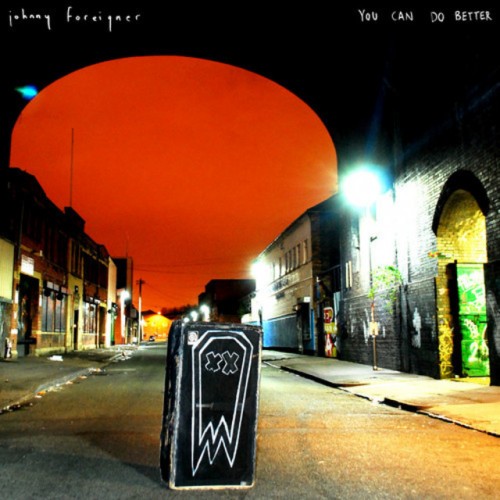 Johnny Foreigner don’t seem to split opinion so much as dominate it – but only if you’ve actually heard of them. For newcomers and rabid fans alike, whose formative years were soundtracked by the Birmingham quartet who rubbed musical shoulders with Los Campesinos! and fight-pop pioneers Dananananaykroyd, a fifth album must be great, novel, or sad proof of an overstayed welcome.

You Can Do Better doesn’t prove – or hasn’t tried to prove – that their sound has matured. Instead, it’s another ten very Johnny Foreigner songs that drive the band’s flag ever deeper into their frenetic, melodic post-emo territory. It’s a reaffirmation of their passion and endurance, and with so many of their compatriots and contemporaries fallen by the wayside, a powerful message put to a signature style that’s beginning to seem defiantly timeless.

“You Can Do Better” kicks off with familiarly frantic string bends and Junior’s rollicking beats that give way to a brief break with Alexei’s inimitable vocals before dropping back into an emphatic, fist-pumping harmony with bassist Kelly. It’s reassuring, a firm musical hug after a year’s long absence. The stop/start pace continues for three tracks before “Riff Glitchard” (outdoing the recent slew of unimaginative celebrity pun band names in one fell swoop) which for four of its five minutes is a mostly instrumental break punctuated by Kelly’s typically emotive lines; “I might as well be an organ in your body, I’m tied to your senses, I feel when your muscles tense”. It’s a not an interlude track by any means, but it totally, deliberately breaks up the flow of the album and forces you to reorient before the track’s inevitable crescendo. This in turn leads into album highlight “The Last Queens of Scotland”, the first track to possess the same wonderful mixture of hook, vocal interplay and driving, imaginative guitar lines as on Arcs Across The City’s “Champagne Girls I Have Known”, the kind of song that makes lifelong JoFo fans of people.

The rest of the album continues apace, more akin to earlier albums; the aforementioned Arcs and Grace And The Bigger Picture and even their less polished and more aggressive EPs. When played next to 2011’s Johnny Foreigner vs Everything, which had a number of spoken word interludes (bordering a little on the over-earnest..), it feels rawer, but also more compact and ephemeral. It almost feels as though after creating such epic, accessible/catchy hits as “Salt, Pepper And Spinderella” (Waited Up ’Til It Was Light) and “Every Cloakroom Ever” (Grace) JoFo have created a more oblique record that demands more intent devotion to unlock its secrets. You Can Do Better is in short still so chock full of restless invention that despite a few tracks near its conclusion (“Le Schwing” and “Stop Talking About Ghosts”, say) being in a very similar key, each track feels necessary and lean.

You Can Do Better is still the JoFo you might know and love, and for anyone coming to it fresh it actually provides a fantastic gate-way album, with fairly obvious retro sensibilities but an energy, enthusiasm and self-confidence that keeps it feeling relevant and modern. It’s not as delightfully variegated as …vs Everything, and it doesn’t have the mad call and response or song structures as their first three albums, yet You Can Do Better still has plenty to say and a definite place in the JoFo narrative. For a fifth studio effort to continually exert a real pull after so many repeat listens is as clear a signal as any to its quality. Despite being perennially overlooked by the mainstream, JoFo seem inexhaustibly happy to keep putting out similarly brilliant albums in the same milieu and sometimes, rarely, more of the same is the best you can hope for.