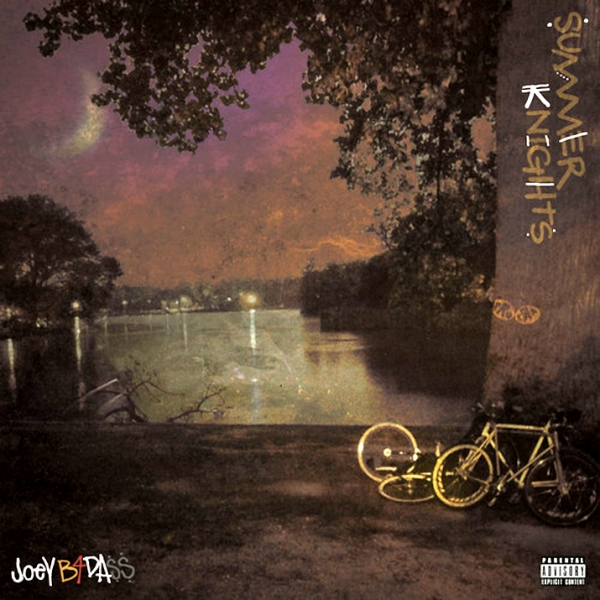 For being only 18 years old, Joey Bada$$ sounds like a veteran. I suppose putting out multiple mixtapes while you’re a teenager will do that. Now that he’s poised to climb up from the underground, he’s put out a new EP, Summer Knights, which shares its name with his newest mixtape from this past summer (as well as five of its tracks). Reminding hip-hop fans to pay attention to him might otherwise come off as desperate, like a child repeatedly calling for his parents just for its own sake. But, given the talent (and instincts) on display here, it’s more like Joey is saying, “Be a part of this now, before it’s cool.”

This, of course, seems a bit counter-intuitive considering little of this release could be seen as such. Lyrically and musically, Summer Knights is more informed by early 90s jazz-rap than anything in mainstream rap today – hell, Lee Bannon’s production for “Hilary $wank” (and “95 Till Infinity”) could be mistaken for A Tribe Called Quest b-side. And so could Joey’s words for that matter. He describes his love for his mom in a rather esoteric manner: “Honey, pop was a bumbaclot and had a queen bee Mommy/ Uh, I love her to the tissue, disrespect my blood and it’s an issue.” Where things get truly interesting, though, is watching Joey’s flow adapt to the song. The tumbling drums have a push-pull effect to them, and certainly a lesser rapper would get lost in the wake; Joey, however, knows when to rap with the beat one minute, and then against it the next in order for the overall song move forward properly.

Which brings me back to paying attention. While Joey’s flow can be staccato-smooth – as seen on “#LongLiveSteelo” – it’s his bark during “Infinity” that’s genuinely attention-grabbing. He raps the verses in a slight rasp like a politician giving a stump speech three points behind, throwing out absurdist brilliance like, “Every time I drop a line, it touch like five placentas.” Then his rasp becomes more impassioned, morphing into a bark when he declares, “95 ‘til infinity time/ We in disguise behind enemy lines/ And I just kill it every time.”

And then you have to remember: Joey Bada$$ is barely an adult. A kid this young shouldn’t be making claims like that unless he can back them up. And then you remember that Lil Wayne started rapping as a teen and made claims early on that he was the best rapper alive. Joey ain’t there yet, but he wants to be. And you know what? He’s well on his way.