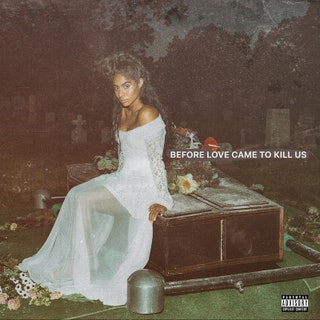 The hallmark of a great R&B artist is one that can retain their commitment to its musical traditions whilst incorporating a wide range of styles and genres into their own artistries.

Jessie Reyez embodies R&B in every sense of the word: a multi-instrumentalist and a singer-songwriter, her voice puts a contemporary spin on the jagged, jazzy soul of musical forbearers such as Macy Gray and Nina Simone.

Despite been co-signed by a slew of collaborators (ranging from Lewis Capaldi to Eminem), it feels like Reyez’s voice has finally come into its own on Before Love Came To Kill Us, a wide-ranging yet intricately constructed debut that stretches R&B to its sonic limits.

Take for example the bluesy “Intruders”, which sees Reyez turn the overwrought ‘love and war’ trope on its head, describing a fatalistic romance through images of war-ships and “heads on a table”. There’s something implicitly self-referential about the lyrics on this song - a spirit exemplified on standout tracks such as the moody, synth-heavy Imported”, which sees collaborator 6LACK coyly announce: “Hi my name is 6LACK / And sometimes people call me SIX-LACK”.

The most distinguishable thing about this album (as has been noted by a slew of listeners and reviewers) is that Reyez isn’t just exploring a wide range of musical genres: she’s excelling at them. Whether’s she’s channeling 50s doo-wop on songs such as “Figures” or the spirit of nu-R&B on tracks such as “Ankles”, there’s an ease and comfort that’s apparent from her powerfully muted vocal delivery - even on missteps such as the Eminem-assisted “Coffin”, which features one the most banal assisted verses of his illustrious career (“I don’t really wanna fight (Nah) / I just wanna spend the night (Yeah)”).

Uninspired choice of featuring artist aside, the artistic breadth and depth of this project speaks to Reyez’s position as an emerging, formidable artist in her own right - someone who knows exactly what a good song, let alone a good R&B song, should sound like.