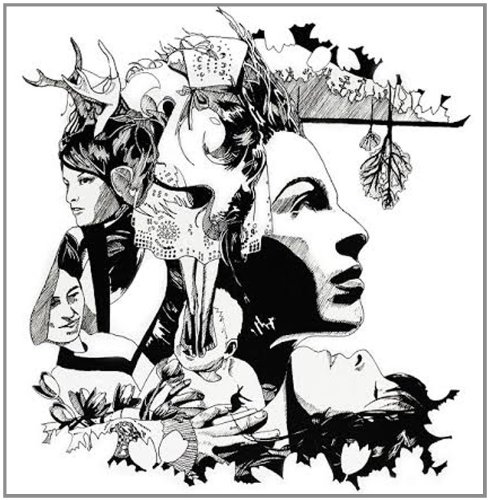 Last year Jesca Hoop – Santa Rosa’s premier singer-songwriter with pop panache and and a taste for rock riffery – unveiled The Complete Kismet Acoustic, a bare-bones retelling of her debut LP from 2007, entitled Kismet. This stripping-down of tracks was a smash hit with fans, and she’s returned now – thanks to a successful Pledge Music campaign – with a dramatic restructuring of Hunting My Dress, the record Hoop created after moving to Manchester; this new version is labelled Undress. She’s not alone either, and we see Hoop escorted by musicians Guy Garvey, Erika Wennerstrom, Sam Beam (Iron & Wine) and Willy Mason into the throes of sonic battle.

The original “Murder Of Birds”, featuring the Elbow mainman, is fairly chilled-out and acoustic as it is. Garvey’s presence is perhaps heightened, his beefy Northern accent sprawling underneath Hoop’s dulcet soprano, duelling as opposed to underpinning. The six-stringers are smoothed out, sanded down and buffed; the tone is earthier, bassier and less clarion than the original, implying a more relaxed ambiance. Willy Mason features on “Whispering Light”, his jazzy baritone popping like a swingin’ Vegas lounge crooner. The track itself is not originally anything particularly heavy, but the Undress version is still pared-down, with the suspense and anxiety on the prime cut transformed into a folky kind of fantasy-epic, with Eastern European hooks like a balladeering Gogol Bordello.

As tends to be the way with acoustic renderings of albums, there’s often a niggling query: is is really needed? Why not just make a new album? Why revisit the old material that people have already bonded with? There are indeed plenty than can be dismissed, and you may think Hoop’s acoustified/skeletonised anthologies can be too, but, and especially with Undress, there is a demand. It’s evident from the amount of backers that aided in bringing the record to fruition that people want them – if there wasn’t a clamouring for more, then it wouldn’t be here, plain and simple. So any qualms can be stowed at the door in regards to its vitality. People want = people get. The beauty of crowdfunding in action.

It’s not necessarily entirely acoustic, as “Four Dreams” still features electricity. It’s not the cantankerous, haphazard clank-fiasco with upright bass and flighty dream-pop vocals, but it’s still plugged in. It’s considerably funkier. There’s also elements of country-western dripped into the mix, to create a strange, desert-rock kind of track. The trip-rock of “Tulip” has been transmuted into a slovenly organic affair; the electro strands have been weeded out in favour of natural supplements. This slight alteration has forged a vastly different aura, and it sounds almost completely different (Erika Wennerstrom’s backing vox help this too). That can be said about a lot of Undressed: while some may be subtle transformations, others are complete and game-changing. This is technically an album of new renditions of old tracks, but it sounds completely fresh in places. Hoop’s ability to compose and rummage and engage in sonic feng shui is wonderfully demonstrated here.

The greatest sadness here is that Undress is unlikely to win over many new fans. As alternate versions, B-sides/rarities and live albums tend to be diehard collector’s items, this probably won’t see many visitors. It is a true shame, as, ironically, this would be a brilliant introduction to Jesca Hoop. It’s got her acoustic tenderness, her electric eccentricity, her knack for structure and her experimental scope. It’s emotional, it’s hooky and it’s loveable, and as a straight-up folk record for those who’ve never heard Hoop’s sounds before, it ticks a great many boxes. But, alas, as dazzling as the album regularly is, it is a fan’s record. It is fan service. But if you know anyone who’s not heard Jesca Hoop before, lob this at ‘em and maybe its purpose will change.