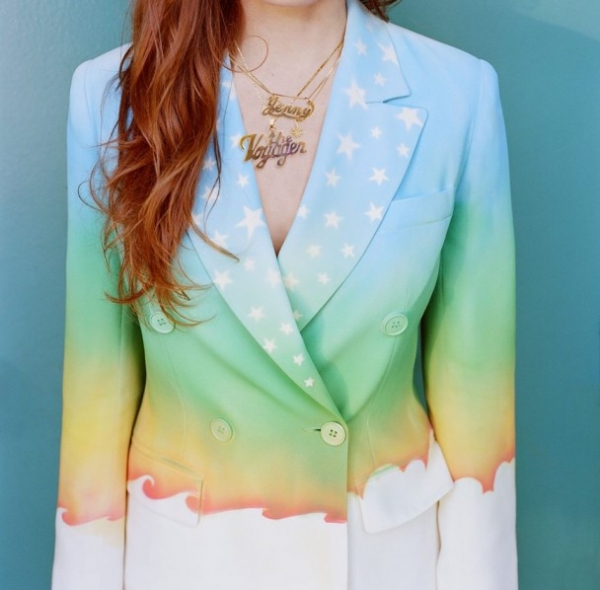 Whatever you end up making of The Voyager, accusations of it being a rush job will invariably fall wide of the mark. It’s been six years since Jenny Lewis dropped her last solo record, Acid Tongue, although as she was at pains to point out when I interviewed her for Best Fit last month, her collaboration with Johnathan Rice in 2010 - I’m Having Fun Now - effectively amounts to “half a solo record”. In the meantime, she’s written her first film score, toured with The Postal Service and, if the early press materials for The Voyager are anything to go by, struggled with insomnia and writer’s block in the wake of Rilo Kiley’s split.

Both Acid Tongue and Rabbit Fur Coat, Lewis’ first solo LP that was jointly credited to The Watson Twins, had a certain uniformity to their sound; the latter was rootsy, scored through with acoustic guitars and nods to folk and country, whilst Acid Tongue went all-out Americana. They marked a serious departure from Rilo Kiley for Lewis, but The Voyager - despite a genuine sense of diversity that betrays its protracted writing process - feels more like a stylistic run-through many of her old band’s sonic touchpoints.

In particular, there’s numerous callbacks to Under the Blacklight, their Fleetwood Mac-inspired final album that should have been the one to bestow upon them crossover success, but instead remains an underrated gem. “She’s Not Me” - written by Lewis in an open tuning after reading Keith Richards’ Life - clearly references that throwback pop sound, whilst “Slippery Slopes” even sounds a little like Under the Blacklight’s title track, and has Lewis harking back to a not-unfamiliar lyrical trope of hers, ill-advised drug use; “slippery slopes/mushrooms and coke”.

“Head Underwater”, too, falls into that same category, sunny harmonies and laid-back percussion present and correct, but that’s about as far as Lewis heads in one particular direction; thereafter, she shape-shifts constantly. “You Can’t Outrun ‘Em” is an exercise in Wild West drama - the lyrics foreboding, the guitars consistently ominous - whereas “The New You”, on the other hand, is a gentler affair on all fronts, although Lewis still manages to rhyme Kill ‘Em All with Headbangers Ball. Purely in terms of storytelling - always one of Lewis’ strongest suits - “Aloha and the Three Johns” is the standout, describing, as she put it, “a failed trip to paradise” in typically acerbic fashion. Lead single “Just One of the Guys”, meanwhile - recently the subject of an A-lister-studded video - also has Lewis on classic lyrical form, as she wrestles with the never-more-deafening ticking of her biological clock.

Production duties on The Voyager were split - albeit, not evenly - between Beck and Ryan Adams, and it’s the latter who comes off the better of the two; given that his professional contact with Lewis was pretty limited before she turned up at his studio on the Sunset Strip last August, you have to chalk up his successes here to plain old intuition. “She’s Not Me”, with its fluttering strings and noodling guitar work, shimmers away gorgeously, whilst his direction to Lewis to write a ballad to put a bow on the record was a masterstroke; the result, the title track, has its head in the cosmos but its heart firmly rooted in Lewis’ keen sense of wanderlust.

There’s plenty of evidence on The Voyager that Lewis is still settling back into the songwriting saddle after a while away; I’m not sure that she meant for it to sound as varied as it does. The end result, though, perhaps also provides a compelling argument for taking your time, because there isn’t a weak track on the album - just varying degrees of excellence, which, come to think of it, is a neat summation of Lewis’ career to date.