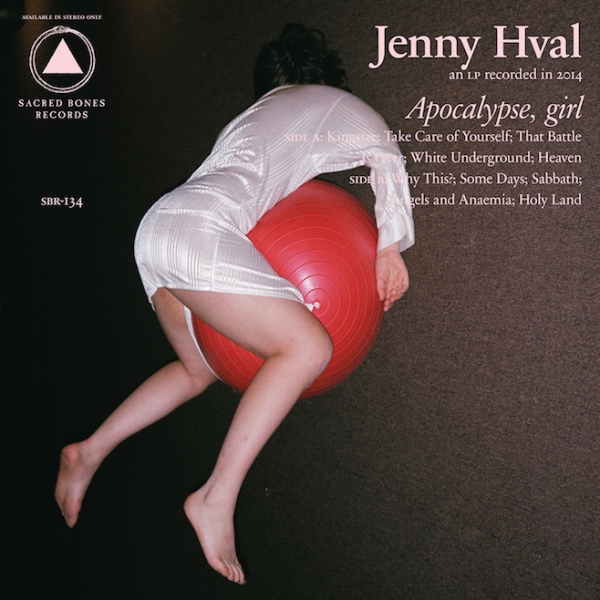 For all the talk of feminist theory, avant-garde music and explicit lyrics, it’s the unlikely influence of karaoke that sets the tone for Jenny Hval’s third solo album under her own name, Apocalypse, girl.

The Norwegian singer and performer – fresh from her 2014 vocal collaboration with Susanna Wallumrød on Meshes of Voice - was fascinated by the “empty voice” technique, as well as the pre-programmed beats and styles one might find in the average household keyboard, as she began to create music for Apocalypse, girl and while this accounts for the variety of styles on this truly incredible album, Hval has somehow completely inverted the apparent emptiness or imposter nature of karaoke and turned in a record brim-full of possibilities.

When I spoke to Hval recently I quoted back to her an interview where she had suggested that previous album Innocence Is Kinky was created specifically to be hard to discuss; while she said this was a joke, in the next breath she told me that Apocalypse, girl was a record designed to be difficult to talk or write about. So what do I say in this review? Do I talk about the mentions of the United States which bookend the album? That the overriding experience Hval was left with after touring from one side of the country to the other with Swans was how her time in the “bible belt” brought back memories of her childhood in Norway dominated by the church? This experience gives us “Heaven”, where Hval utilises a sing-song choirgirl technique which develops into intense muttering and back into a cooing vocal as she recalls singing in church, cloistered by unforgiving right-wing Christianity. “What’s wrong with their voice? / I sing like this when I’m at home / I shut mouth and ran away / spat out that neoliberal, girly heart”, sings Hval with apotheosis overcoming her and ironic, celestial strings soaring and swooping all around this girl dressed in black.

Maybe it’s the explicit language we should discuss; from the moment Apocalypse, girl opens with the Mette Moestrup-quoting “Kingsize”, Hval is wonderfully, hilariously open with her words. From “soft dick rock” to “the huge capitalist clit” the spoken-word opener is an astonishing start, and far from being confrontational she’s asking us to engage fully with her ideas. Yes, the listener might be taken aback at first but this is language we’re all familiar with, and honesty we’re all familiar with too, and once you get a handle on Hval’s sense of humour then the recurring “soft dicks” of Apocalypse, girl are as funny as they are useful as a tool to discuss masculinity, femininity and gender roles.

That’s what we find on “The Battle Is Over”; a pastiche of soul music where Hval’s interest in karaoke takes over. While a parody it may be, Hval’s voice is stunning as she sings “Statistics and newspapers tell me I am unhappy and dying / That I need man and child to fulfill me, that I’m more likely to get breast cancer / And it’s biology, it’s my own fault, it’s divine punishment of the unruly.” The battle, while encompassing feminism as a whole, is more personal than political as Hval questions growing older and her body betraying her….or is it just society telling her this is the case? It’s the fragility of the human condition analysed very much like on Pharmakon’s Bestial Burden but perhaps from a more psychological or theoretical point of view.

But as much as there’s a serious point, Hval also plays it for laughs. The question “what’s wrong with me?” in “The Battle Is Over” is a joke, a challenge – much like the title and whole of “Take Care of Yourself”, or the cry of “self-doubt, it’s what I do” on “Angels and Anaemia”, where Hval croons a list of questions over white noise and doomy synths about what society expects of a human being before probing at the oft-ridiculous nature of sex and sexuality, the soft dicks making a reappearance along with first of a series of cunts. In the midst of this there is a serious question being posed about desire but Hval, ever the contrarian, never allows us to completely know her feelings.

The highlight comes in “Sabbath”, where Hval indulges in a dreamlike stream of consciousness recalling a dream she had as a child where her vagina had braces. The story/song is fluid and full of transformations delivered over a martial drumbeat (provided by one of the album’s guest musicians Thor Harris who appears alongside Swans touring partner cellist Okkyung Lee and Hval’s fellow Norwegian experimentalist Lasse Marhaug) but the one thing that doesn’t change is Hval’s control of the song, the knowledge that it’s about and for women, laying waste - as with the preceding tracks – to held notions about sex, gender and sexuality.

Apocalypse, girl is staggering in so many ways; funny, shocking, engaging, musically ambitious and uncompromising. Music which delivers instrumentally, lyrically and thematically is hard to come by but Jenny Hval carries everything off with an almost unbelievable aplomb. Forget your fears of this being allegedly experimental or difficult music…not just one of the best of 2015, Apocalypse, girl is one of the best records in a very long time.