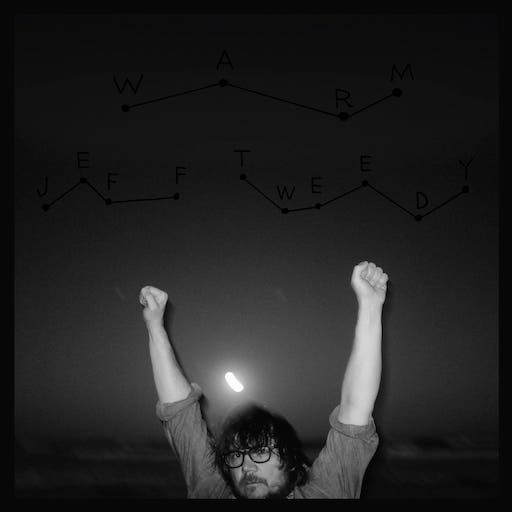 ‘‘It’s hard to say what I’ve been through should matter to you”, Jeff Tweedy sighs towards the end of “Bombs Away”, the hushed opener on his thoroughly excellent new solo album. It’s a good point.

So far, Tweedy's songwriting has tended to veer far, far away from the kind of soul-baring transparency that motivates many of the classic songwriters who form an integral part of the Wilco chief's musical DNA. Rather than going for the full confessional, Tweedy's chosen to emote in an idiosyncratic manner that's simultaneously almost impenetrably oblique and (at its best) impossibly moving: Tweedy provides the imagery, the listener decides on an exact meaning that's best in tune with their own experiences and circumstances.

This makes the directness (relatively speaking: we're hardly speaking of a sneak peek at diary entries here) of WARM such a refreshing change of direction. Released to coincide with the publication of Tweedy's candid, revealing and by turns hilarious and harrowing autobiography Let's Go (So We Can Get Back), which proves that Tweedy is every bit as gifted at crafting prose as he is at songwriting, there's a clear ‘synergy’ between the two projects. Journeying through his musical and personal past (including the rise and messy demise of hugely influential formative band Uncle Tupelo and the acrimonious band and label politics related to the first half of Wilco's latterly stable, nearly 25-year existence) and processing painful recent experiences has led to a set of deceptively simple songs that appear less intent on installing disguising layers between the songwriter's personal feelings and what is printed on lyric sheet.

Much as the writing of Neil Young's first book Waging Heavy Peace led to a return to first class musical form on 2012's Crazy Horse reunion Psychedelic Pill, the slow and laborious process of drafting an autobiography seems to have reawakened Tweedy's thirst for engaging fully with the immediate and extemporaneous thrills of songwriting. Not that Tweedy's output has ever taken a serious dip. However, unlike 2014's duo album Sukierae (the murky, anxious atmospherics of which are put in stark context by the chapter on Tweedy's wife second cancer diagnosis and subsequent treatment) with son Spencer (who, alongside Wilco drummer Glenn Kotche, is the only guest musician on WARM) under the Tweedy banner, the 51-year old's recent albums with Wilco (Star Wars from 2015, 2016's Schmilco) have at times struggled to confound the low expectations set by their throwaway titles.

There's some lightweight fluff on WARM too in the form of "Noah's Flood (Let's Go Rain Again)” but even that is catapulted into greatness by a cowpat-splattered country-rock arrangement that harks back to Wilco's earliest recordings via Everybody Knows This Is Nowhere. Also keeping with the example set by Neil Young, the themes of Tweedy's book feed into the songs; in a clever bit of unintentional marketing, the deceptively simple songs on the record gradually gain even more immersive depths if you've read the book, whilst WARM could be said to form the next chapter for the book, albeit in audio form.

"Don't Forget" is a masterful, misleadingly jaunty love song on its own merits, but reading Tweedy's printed account of the final stages of his dad's cancer makes the verse about a long drive to say goodbye almost unbearably moving. Mortality, this time possibly the songwriter's own (in a typical Tweedy fashion, the song reveals much but keeps you guessing to better accrue universal resonance), is also at the core of the weightlessly floating, breathtakingly beautiful "From Far Away", which nods towards the dissonance and fragmentation of such acknowledged totems of American art-rock as Yankee Hotel Foxtrot (2001) on an album otherwise characterised by sparse settings. A few sarcastic lines during the mesmerising slow-burn of "Having Been Is No Way to Be" take a dig at fans who feel Tweedy was at his creative peak when he was battling the painkiller addiction that nearly killed him during the recording 2004's tense A Ghost Is Born. A masterpiece of 'sad mid-tempo rock', to use a phrase that Tweedy self-deprecatingly uses to summarise his MO as in the introduction to his book, "I Know What It's Like" sounds like Tweedy's most unashamedly direct and catchy tune since 1996's Widescreen Americana landmark Being There, whilst the spectral "Warm (When The Sun Has Died)" could be a parent's prayer for a child, or a songwriter's self-help mantra.

"I leave behind a trail of songs, from the darkest gloom to the brightest sun", Tweedy states during "Bombs Away". WARM sees this industrious figurehead of intelligent American rock return to a form where he can balance these two extremes effortlessly and make the deeply personal sound thoroughly universal in a manner that is unlikely to leave cold anyone with a heart that is still beating.